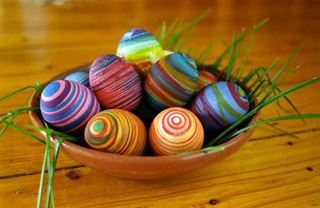 As the Easter weekend is upon us we know not all of you Garage heads will celebrate this holiday for the same reasons. So, We decided to go  digging around  to share with you some cool facts about Easter.  Most of the rituals based around easter have symbols connecting to christianity such as,  the eggs, for example, can be taken as signs of rebirth and resurrection. Some of Easter’s symbols can be traced back still further; some (such as the Easter bunny, originally a hare) seem to have their origins in earlier pagan rituals celebrating nature’s springtime rebirth; while others can be traced back to Jewish customs (such as the lamb often eaten at Easter feasts, which echoes Passover’s paschal lamb). (Eggs can be related to both pre-Christian traditions.)
In Norway, in addition to skiing in the mountains and painting eggs for decorating, it is tradition to solve murders at Easter. All the major television channels show crime and detective stories (such as Poirot), magazines print stories where the readers can try to figure out who did it, and many new books are published. Even the milk cartons change to have murder stories on their sides.
In the Czech Republic, a tradition of whipping is carried out on Easter Monday. In the morning, males whip females with a special handmade whip called pomlázka. The pomlázka consists of eight, twelve or even twenty-four withies (willow rods) and is usually from half a meter to two meters long and decorated with coloured ribbons at the end. It must be mentioned that while whipping can be painful, the purpose is not to cause suffering. Rather, the purpose is for males to exhibit their attraction to females; unvisited females can even feel offended. The whipped girl gives a coloured egg to the guy as a sign of her thanks and forgiveness. A legend says that girls should be whipped in order to keep their health during whole next year. The females can get revenge in the afternoon when they can pour a bucket of cold water on any male. The habit slightly varies across the Czech Republic. Some feminists allege it is a disgusting medieval tradition.
So…. whatever you have planned for this Easter weekend, weather it be hunting eggs, solving crimes or a colorful whipping, enjoy and remember there is something in common for us all to celebrate, LIFE. Happy Easter!