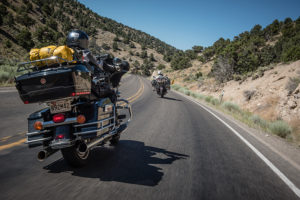 Some people you meet and you just automatically know there is a reason why this person is in your life. You don’t chalk it up to just a coincidence, you know better. You know there is a bigger force behind it all. You probably don’t know what that force is, or have figured any of it out, but you just know.  There is a reason, and you take peace in knowing that someday, the reason will be clear to you.  It may be later that day, maybe later that week, or maybe even later that year, but it will come, and it will all make sense to you.

I had that feeling the night I met Marjorie White and Lisa Niner in Springfield, Massachusetts.

We were on the Sister’s Centennial Motorcycle Ride, honoring the cross country route that Adeline and Augusta Van Buren had bravely ridden by themselves a century earlier aboard Indian Motorcycles trying to prove their worth to the United States Army.

I was working and had my video camera with me when Lisa made a comment about my Nike SFB boots. I myself did not serve in the military, but being engaged to a man that served, I was introduced to some of the best gear to work and play in.  Lisa had served, and served an amazing career in the Army.  We instantly had a bond going and she made me smile. I ran into her again at the opening reception party for the ride and this time she had Marjorie White with her.  I have no idea how the subject even came up, but Marjorie and I were soon talking about personal family moments and we were both in tears, and at that point I knew we were going to be great friends and share something special on this journey we were about to take part in. We were leaving to ride cross country on motorcycles, for 3 weeks.    The days were filled with beautiful landscapes and interesting historical places of significance.  The nights for me were filled with editing into the early hours of the morning, but for everyone else they were filled with bonding over great moments from the miles ridden that day.  We tried our best to ride with as many different groups as we could, there were over 68 women riding from coast to coast and we kept picking up more along the route.

As always, some of my best times and memories come from letting things happen organically. I have to at some degree do some planning when journalism and photography and video are involved, but I really do try my hardest to just let things happen and be ready to capture the moments that present themselves.  That proved to be the case this day. We were leaving Ely Nevada to ride into Carson City. We thought we knew what we were going to do, but as the morning progressed, I found myself in the parking lot with Lisa Niner and Marjorie White.  I asked if they would mind riding with us so we could grab some footage and spend some time together.   They accepted and we were off.   Watching them ride down the road reminded me of the scene from Easy Riders when Wyatt and Billy are just blasting down the road enjoying the freedom of the ride. I could see the heavy burdens we all were carrying with us start lifting, we were all open to that feeling of just being in the moment, like time almost standing still.  We rolled into a small town to get some fuel.  Marjorie was heavy with thoughts of her son and brother who had both passed away.  We gave her the time she needed and decided we would ride up the street to a very neat looking, old run down store to hang out and take some photo’s. 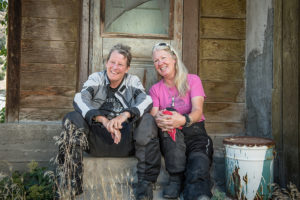 Marjorie was pulling around, hit some sand and dumped her bike, Lisa started cracking up and grabs her phone snapping shots of her friend who is on the ground with her motorcycle!  I’m thinking “What is going on?”   I run over, they are both laughing and ask me to get in the photo. This was tradition for them, when one falls over they take pics and laugh, after making sure the other is ok of course.  We all laughed and got ourselves picked up off the ground.

We shared some more time talking about our lives and the challenging times we all have had to face. We were all using this ride as a way to find some healing in our own personal ways. I think anyone that does a long ride like this ends up finding some personal healing and or growth, even if they are not open to it.

Our delay pushed us back even further when we found out Marjorie had bent her shift lever. A little side of the road repair and we were back out on the long, lonely roads of Nevada. 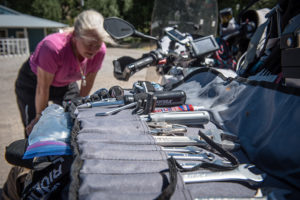 We were planning on stopping at the official lunch stop of the ride, to meet up with the rest of the group, but with our delays we decided to stop at the next town we rolled into. Austin Nevada.  We found the coolest old Country store/restaurant/bar and walked in.  There was a young girl having a conversation with the older women behind the counter.  The three of us looked at each other, we were just so impressed with the conversation this young girl was having, she sounded so mature.  She started talking about riding her dirt bike, so we joined in the conversation and told her we have been riding motorcycles for the last few weeks and were traveling from Brooklyn, NY to San Fransico, Ca.  The young girl just nodded and said ‘Cross country riding, boy I bet that is just the most fun you could ever have.”  She was right.  Niner handed her a card that explained all about the sister’s centennial ride.  She looked at the card and repeated the word centennial a few times. She then pointed out that the “T” in centennial had such importance, stating that is is the “Soul of the word, it carries all the spirit of that word.”   Again, the three of us were just shocked by the things this young girl was saying.  Her lunch order came up, she grabbed her food, thanked the lady behind the counter and said good bye to us.  I asked her name and she said her name was Chole, I asked her how old she was, “I’m nine years old M’am.” she responded as she walked out the door. 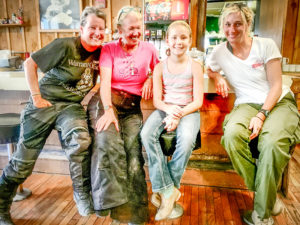 We all decided that young girl was supposed to cross paths with us, if it weren’t for all our strange delays on the ride that day, we would have never met Chloe.  Marjorie was convinced she was an angel that her son Tom sent down to us.  Later I found out the meaning of the name Chloe,  it means  “new growth, or new beginning.”

I have to send a big thank you to Tommy for sending us that angel, she slowed us all down that day and reminded us that on our journey through life, we will never stop learning, never stop experiencing challenges, and it’s all because we are meant to continually grow through life.  Thank you Chloe, for showing us it’s ok to start a new journey, and more importantly it’s ok to have the “T” the “cross” in our life, for the cross will help carry us through those tough times awakening our soul and spirit.   By the way, Nine is a number of spiritual awakening and the color meaning of white is purity, wholeness and completion.  Thank you Lisa NINER and Marjorie WHITE for sharing this journey with me. We will forever be friends and we will forever share our stories of growth from next journey’s. 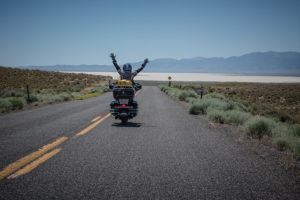 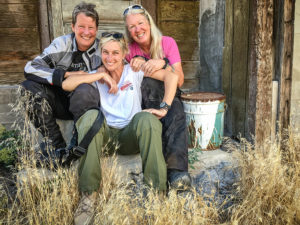