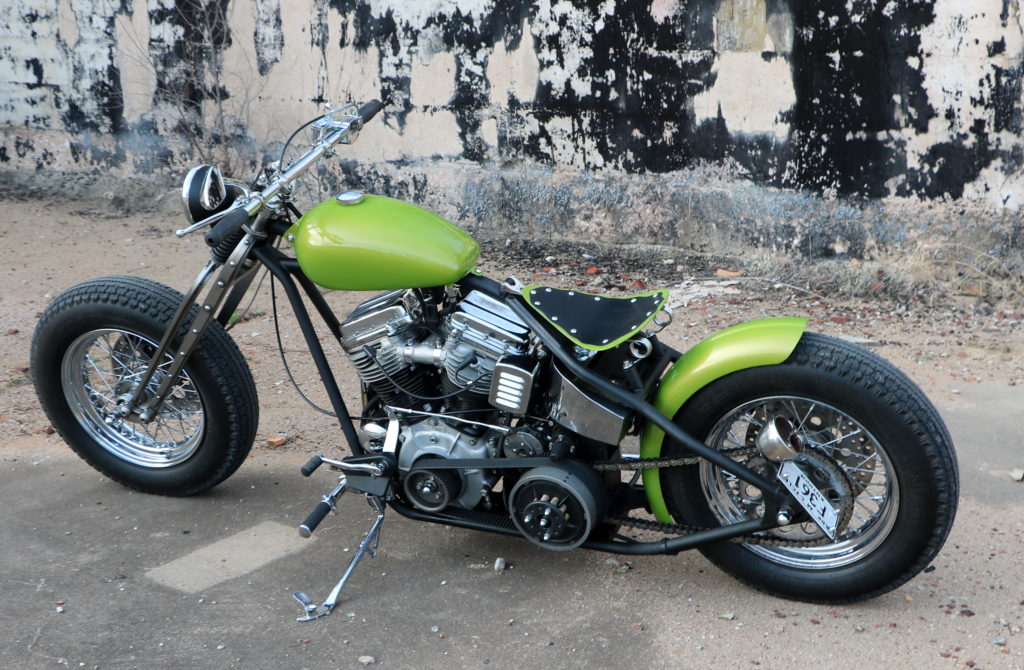 Below is an update from our 2014 Ultimate Biker Makeover winner Chris Gibbany, she has been busy and is now gearing up for a cool long ride. Check out what she has to say.

“Since my last update in early 2016, my life has kept revolving with new adventures.  One of my biggest goals has always been to attend The Horse Smoke Out.  With pets and other obligations, this has not been possible….until NOW!  Our beloved dog of almost 11 years passed away in late December and a few months later I found out some exciting news; “The Long Road” is leaving from Eureka Springs, Arkansas, just 45 miles from where I live!!!!  “The Long Road” is a multi-day journey in June that consists of 1000+ miles and starts each year from a different part of the US and ends up at Rockingham, North Carolina, where The Smoke Out is held.

In 2015 my Panhead tattoo sleeve was in the magazine’s “Tattoo Corner” segment and the following month, my 1981 Ironhead “Iron Man” received a four page feature.  The Horse Backstreet Choppers is one of my favorite magazines and I wanted to be there in 2015 when the issue went on sale at The Smoke Out  with my Ironhead.  Fast forward to 2017 and I am riding my Panhead full time and almost done with my 1939 Knucklehead.

When I decided to ride my 1956 Panhead chopper, that I designed and my husband and I built in a backyard shed, everyone was skeptical.  My bike has an open belt primary and just a small strip of leather screwed onto a Baas Metalcraft seat pan.  I was told that no woman has ever ridden a vintage, much less a hardtail vintage bike on “The Long Road”.  I would have never dreamed that when I bought my Panhead engine eight years ago that I would be doing this!  I have also been fortunate to obtain supporters for my big ride. Most of which were part of the Garage-Girls Ultimate Biker Makeover. 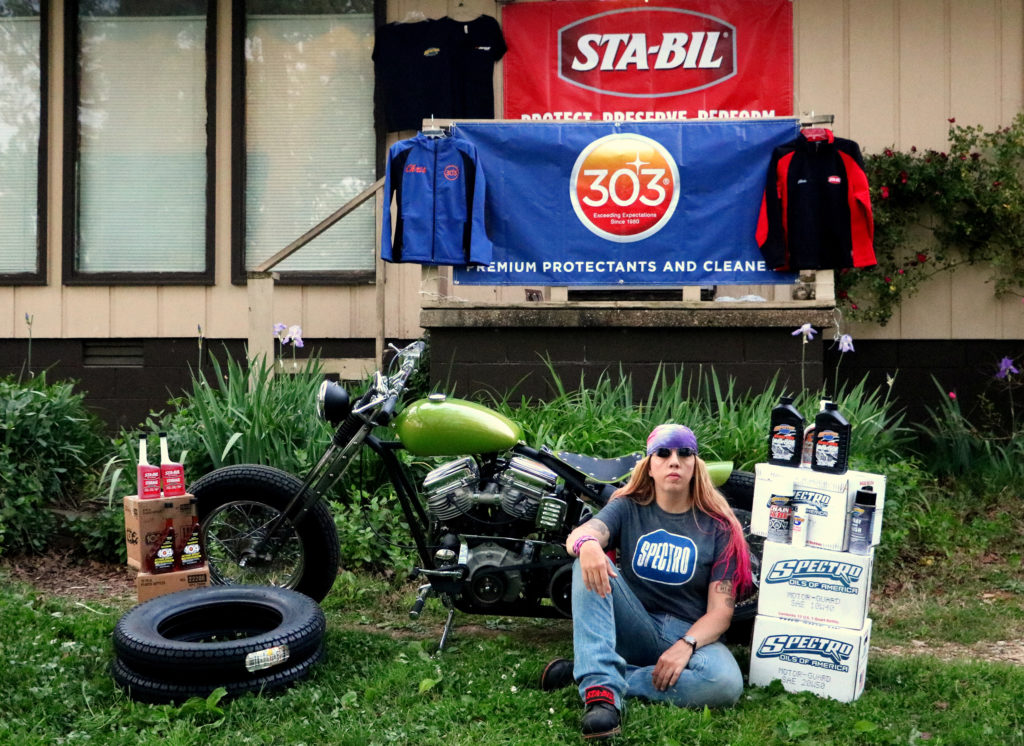 Avon Tyres has come on board as a sponsor since they remembered me winning the Garage-Girls Ultimate Biker Makeover in 2014.  I only run Avon MK II’s on the front and back of my bikes so I am very grateful to have them as sponsors.  The Avon MK II’s look awesome on classic rides plus they handle and perform even better!

Spectro Oils also stepped up as a sponsor for my trip.  Spectro sent me a case of oil when I won the Makeover in 2014 and I am now getting the chance to use their straight 60 weight oil in my vintage bikes!  Not only are they supporting me on “The Long Road”, they are also helping support my vintage car addiction by sending me their Motor Guard high zinc oils made specifically for flat tappet cams.  Most conventional oils do not contain enough zinc or phosphorous so I am really looking forward to trying this oil from Spectro!

Viking Bags and Motorcycle House have decided to sponsor me as well by providing me with a Go Pro Hero 5 Session video camera to take on my trip!  I have been working with Viking Bags and Motorcycle House on and off since 2014.  I have recently had the opportunity to test some of their AWESOME products.  Their Viking Bags are very well made and I am really in love with their moto backpack, but I am most impressed with their leather jackets (which weigh six pounds each) and are high quality like the vintage Wilson Leathers of yesteryear!

Baker Drivetrain has agreed to help me and I absolutely won’t build a big-twin Harley without the N-1 shift-drum that puts neutral on the bottom.  In my opinion, that is where it should have been from the factory.  I bought my first one in 2013 and purchased another one for my Knuckle shortly thereafter.  My tattoo artist, Dessa Blackthorn, owner of Tattooz by Sassy  in nearby Mountain Home, Arkansas has stepped up to sponsor me; so has my favorite cousin, Carla Curtis! 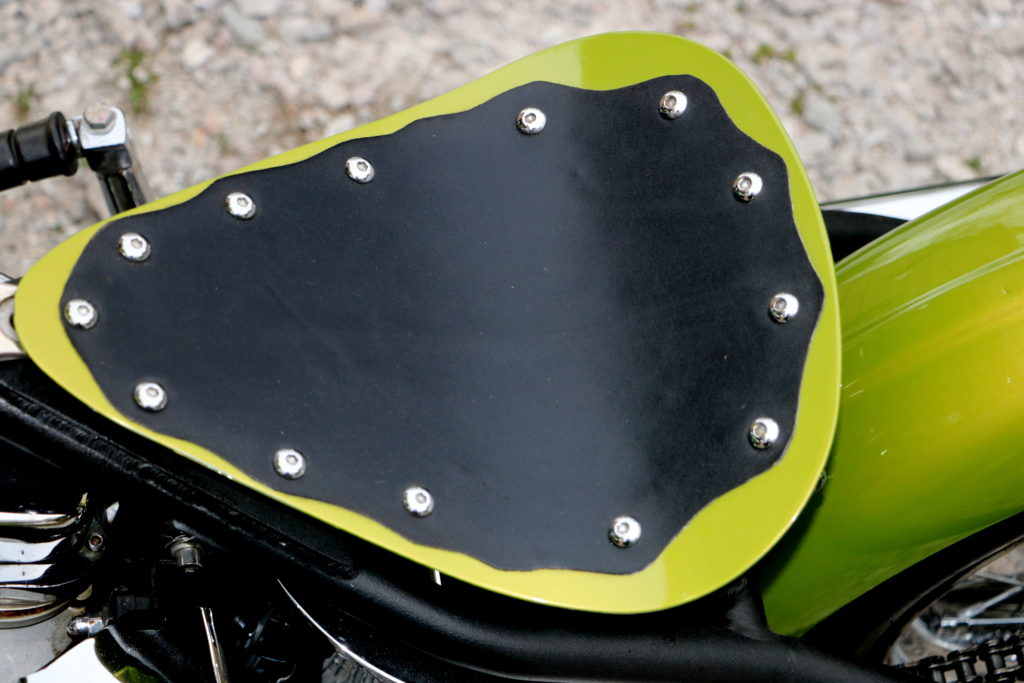 My main passion in life (besides old Harleys and hot rods) is PROMOTION and MARKETING.  Several magazines are already up for running this as a feature.  I am looking for other sponsors to help supply me with gear or anything else I might need.  I will be taking my camera with me and recording images along the way.

I am currently in the midst of hosting my second annual “Throwback Thursdays” where I show old car movies at the local Drive-In, free of charge to anyone driving a pre-1980 vehicle.  Although everything I do is 100% volunteer, I am using my GOD given passion to not only promote women but the hobby in general.  I would like to motivate others that if you have your priorities straight, you can accomplish almost anything you set out to do!

I live and breathe for the machine!” ~ Chris Gibbany, Old Iron Never Dies!