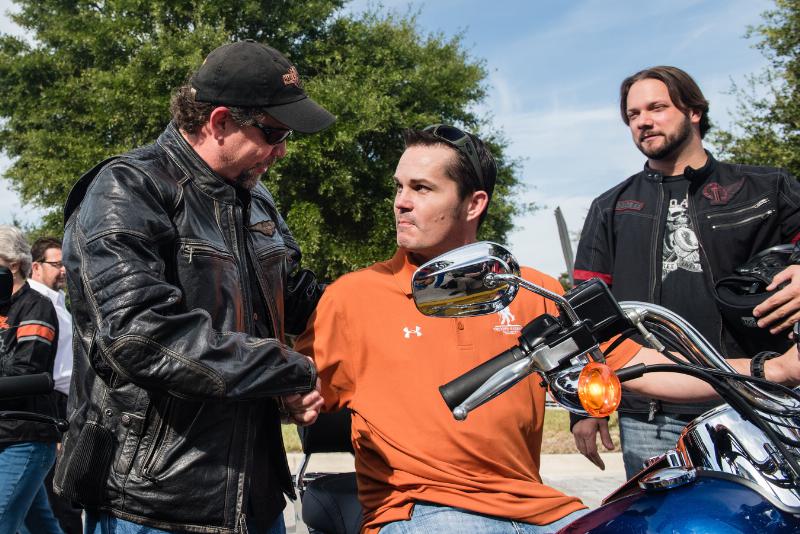 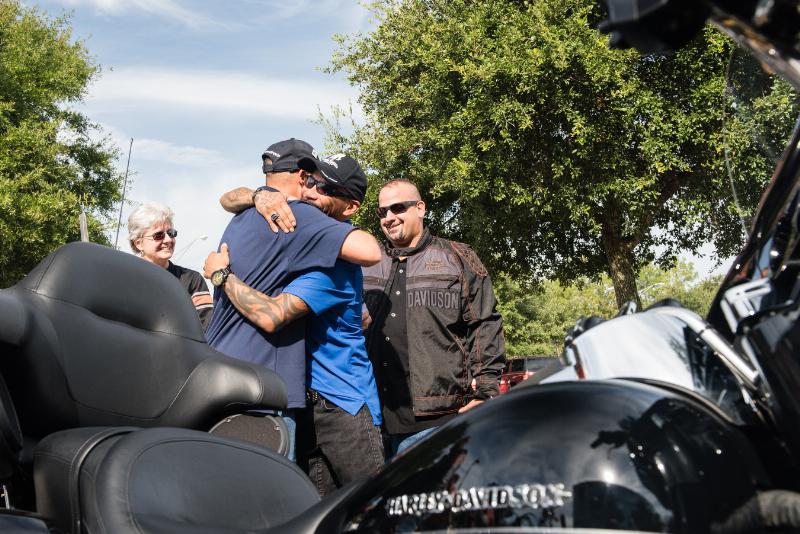 Harley-Davidson made a special delivery of new 2015 motorcycles to six U.S. military veterans, today. The surprise jumpstarts a new partnership between Harley-Davidson and Wounded Warrior Project to help improve the lives of service men and women living with post-traumatic stress disorder (PTSD).

Bill Davidson, great-grandson of company co-founder William A. Davidson, along with six Harley-Davidson employees who are veterans, rode the bikes – led by police motorcade – to Wounded Warrior Project headquarters in Jacksonville, Fla. The team of riders gifted the motorcycles to the injured veterans during a press conference scheduled to announce the partnership.
The six veterans – all of whom have been diagnosed with symptoms of PTSD – were hand-selected to receive the motorcycles because, although they are experienced riders, they no longer have access to bikes due to various hardships. The veterans all are affiliated with Wounded Warrior Project.
“It is important to have the support of corporations like Harley-Davidson which understand the long-term needs of our nation’s veterans and are willing to work with us to help warriors uncover and live with their ‘new normal,'” said John Roberts, EVP of Warrior Relations at Wounded Warrior Project. “We know from our warriors that recreational activities like motorcycle riding provide a multitude of therapeutic benefits for those living with PTSD.”
As part of the new partnership, Harley-Davidson will collaborate with Wounded Warrior Project to develop a program geared toward helping more veterans experience the positive benefits of the open road. Peer-to-peer activities, like motorcycle riding, have been known to provide positive therapeutic benefits for PTSD. One in three returning troops is diagnosed with PTSD symptoms and less than 40 percent seek help.
“We’re proud of the nearly 100 years of support Harley-Davidson has provided to the men and women who defend our country and our freedom,” said Matt Levatich, president and chief operating officer at Harley-Davidson. “Our partnership with Wounded Warrior Project builds on that legacy by supporting these veterans in their quest for strength, freedom and independence.”
HARLEY-DAVIDSON: TOUR OF DUTY Harley-Davidson has supported the U.S. military, and the men and women who serve our nation, since 1916. The company ramped-up production in World War I, where approximately one-third of all bikes made in 1917 and 1918 were purchased and used in the war. In World War II, the company produced nearly 90,000 WLA models – the workhorse of wartime American motorcycles. Harley-Davidson earned the coveted Army-Navy “E” award for wartime production during World War II.
The company also is proud to employ more than 410 men and women who have served our nation in the U.S. Military, which is more than 10 percent of the company’s U.S. workforce.
Visit H-D.com/Military to learn more about Harley-Davidson’s long history with the U.S. military, as well as the company’s new partnership with the Wounded Warrior Project.