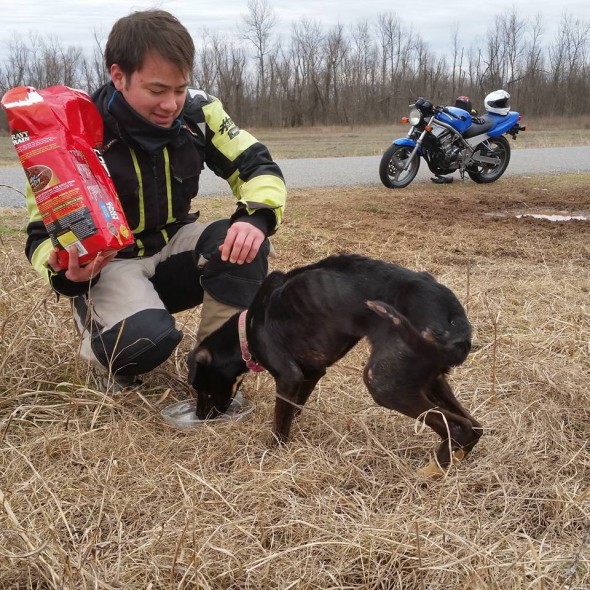 From Life with Dogs
On January 31, 2015, Bret Winingar from Little Rock, Ark., was out riding his motorcycle with some friends and family members when he came across an old pet carrier tossed in a field on the side of the road. At first Winingar thought nothing of it, but upon inspection, he discovered an emaciated female dog left trapped inside the crate.
No one knows for sure how long the dog had been abandoned in the crate, but the black colored dog was extremely under weight, had her nails so long they were embedded under her own paws, and presented an unnatural posture due to the prolonged entrapment in a cage too small for her size.
At first the motorcyclist drove away but not because they were turning their back on the dog, but because they went to get food and help.
Winingar and another motorist named Zach came back with a bag of dog food. They opened the crate and learned the abandoned dog had tried desperately to chew through the plastic crate. They fed the dog small amounts of food and left her in the field while they went to get their truck to transport the dog to safety.
The men named the dog Charlie Bravo (CB) and Winingar welcomed her to his home where became the fifth rescue pet. Winingar originally planned to find her a forever home but after nursing CB back to health and falling in love with her personality, the rescuer decided to keep her.
Based on the dog’s initial lack of social skills and her skittishness toward human interaction, rescuers believed she lived most of her life inside that crate. But thanks to the love and care the Winingar family have given her, Charlie Bravo has blossomed into an amazing, friendly and healthy pet. 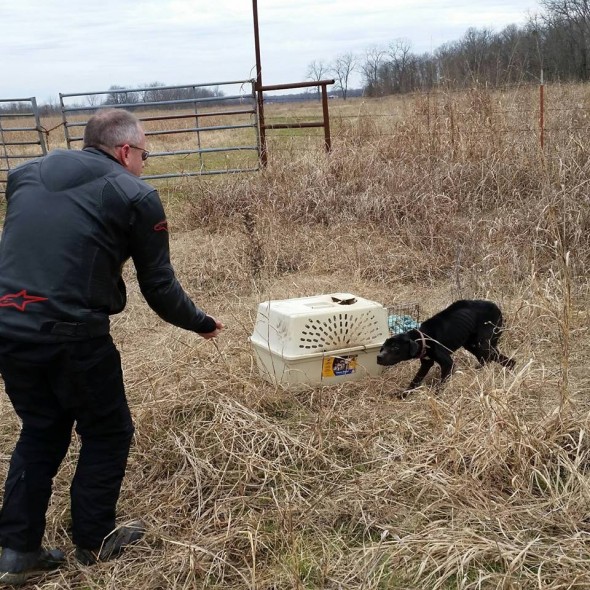 CB has more than doubled her weight since rescued. She is very playful with her fur siblings and enjoys sleeping on the couch.
A Facebook page called “Charlie Bravo; rescued motorcycle dog” set up by her rescuers helped Charlie Bravo gain local news attention and thanks to the page and the local coverage, many people donated money to help cover the dog’s extensive medical costs.
Winingar says that after paying CB’s medical bills there were enough funds left over and the family plans to use them to start a foundation called “Charlie’s Angels.” They want to honor CB and the outpouring support they’ve received from the community. Winingar says the foundation will benefit other abused and abandoned pets in need.
Check out the Charlie Bravo Facebook Page