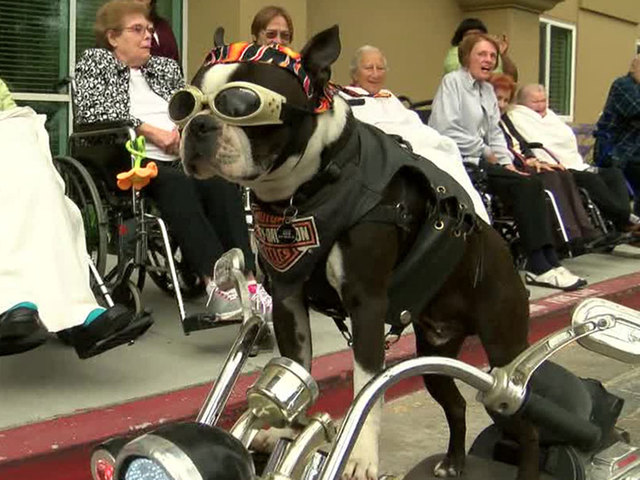 SAN DIEGO – San Diego’s most famous therapy dog lost his certification and his therapy team partner is furious.  Chopper the Biker Dog has visited thousands of people in hospitals, schools and senior living centers up and down the West Coast. Chopper has been certified by Pet Partners since he began working as a therapy dog five years ago.  His therapy partner and owner, Mark Shaffer, said he learned Pet Partners suspended Chopper’s certification after the two returned from an 11-day trip to Eugene, Oregon. They stopped at VA hospitals and police departments every day along the trip.  ”Disbelief,” said Shaffer. “There was anger and there was a lot of hurt.” Pet Partners told Shaffer the certification was suspended because it did not approve of Chopper’s biker outfit. Chopper wears a leather vest and a bandana.  ”They claim they don’t allow dogs in costumes. This is not a costume,” explained Shaffer. “This is his persona. This is what he is.” You can visit Choppers FB page here.