My Dad and I share a lot of the same interests, I credit him for turning me into the gear head I am. He even hooked me up with his 1966 Mustang for my first car. That car had only 32,000 original miles on it.   We both enjoy road trips and we like the same music.  I made sure to have his favorites on hand, some Led Zeppelin, Black Sabbath, Lynyrd Skynyrd and of course Van Halen. We had perfect weather as we loaded up my Dodge Van (know as the ‘Dodge Mahal”) and we drove west.  I was taking my Dad to his first ever Indy 500 race. My Dad is 76 years young and this was a big deal.

My dad always drove us everywhere for our family vacations. He even drove us to Daytona in 1979 in a van stye motorhome to watch the 500. We parked in the infield and he took me down to the pits. I spotted my favorite driver Richie Evans and his crew around his famous orange number 61 car. we were on the other side of the fence and I was screaming his name over and over trying to get his attention. Finally one of his crew spotted me and gave Richie a heads up about a “little fan”. He gave me a big wave and I couldn’t have been happier. There I was holding my Dad’s hand getting a wave from Richie Evans infield of the Daytona Speedway. My Dad just created a racing fan for life.

Dad grew up racing boats, then cars,and after returning from Germany where he was stationed in the Army he started his business and his family. There wasn’t much free time for his racing career and he was ok with that. He took us to the races every weekend. He shared his passion of racing with his family and we loved it. Me, my sister and brother each had our own favorite driver. I remember at one race Dad bought me a pair of orange sunglasses, I loved those “Richie Evans” glasses. 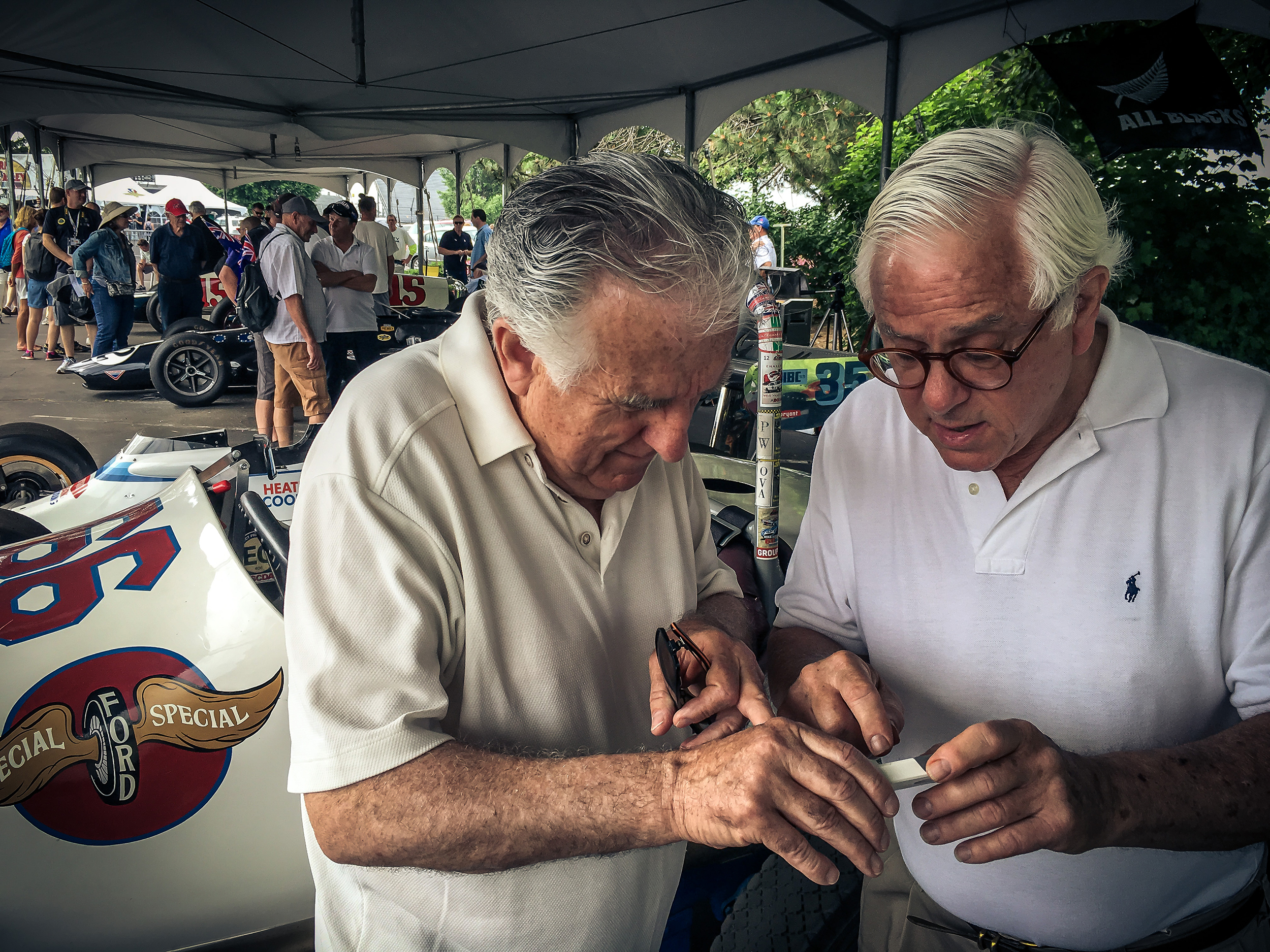 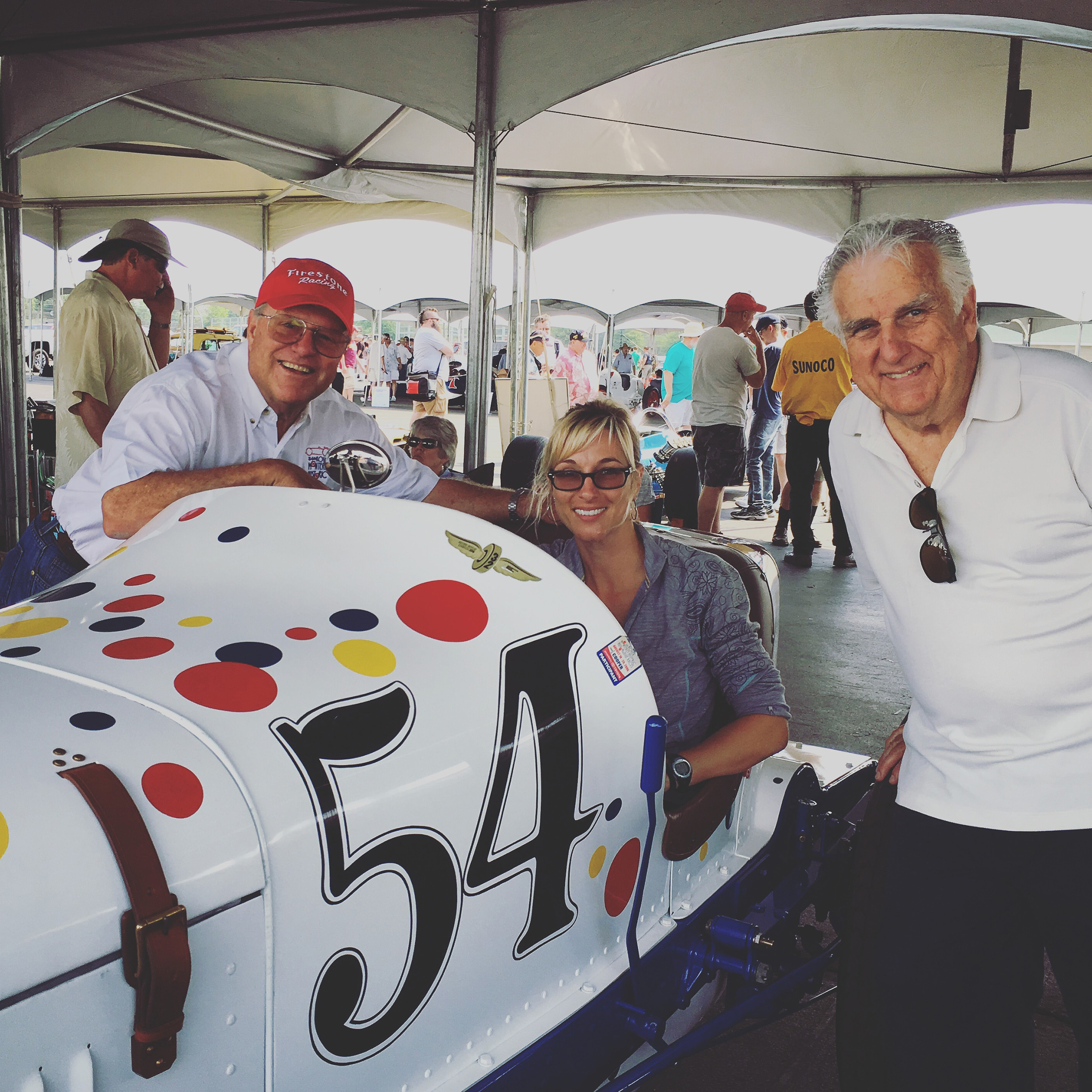 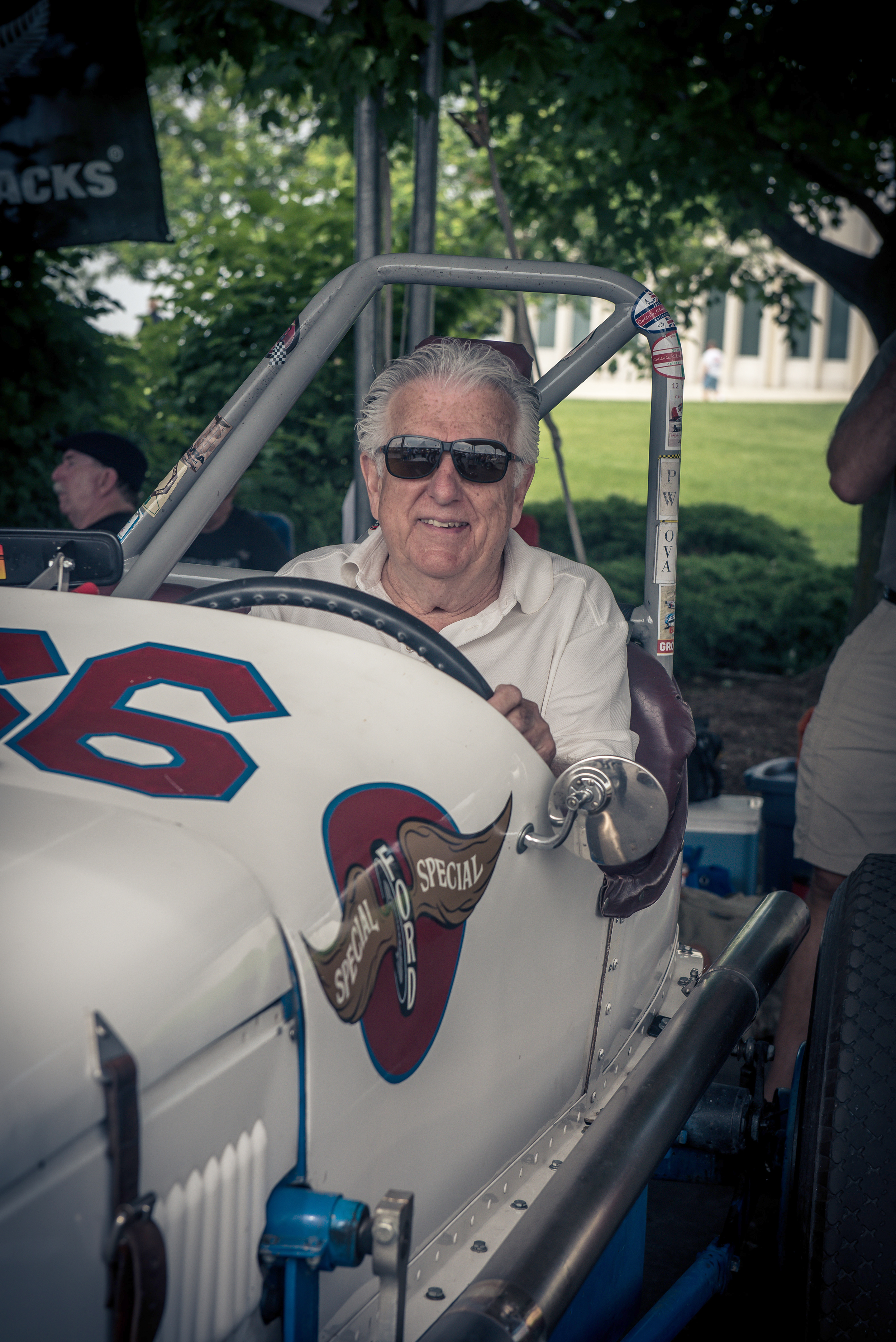 Saturday was the day I think we were both super excited about. This was the “Legends Day” at Indianapolis Speedway. A ton of vintage Indy race cars would be at the track and would be running a few laps. This day was going to be even better since two of Dad’s friends were going to be here with their vintage cars. Pat from California had his 1933 Duesenberg powered Wonder Bread Car and Lou from Chicago had his Ford Flathead 34 car.  We got to watch these guys and about 60 others run these cars on the track.

The vintage cars fired up and made their way to the track. the rear engine cars took to the track first. You could hear each shift as these heavy machines steadily got up to speed, some of them hitting well  over 140mph. The front engine cars grabbed the track next and the speeds were higher.

These cars were painted with brighter colors and I loved chasing the streaky rainbow of color through my camera lens as I panned with the cars. I would occasionally glance over at Dad to see the huge smile on his face. I knew this was such a great day for him.  We made our way over to the pit area to see the cars up close and to talk with Dad’s friends. We took pictures sitting in cars and laughed sharing stories.  It was so great to share this with him, and I couldn’t help but recall that day in 1979 at the Daytona Speedway. 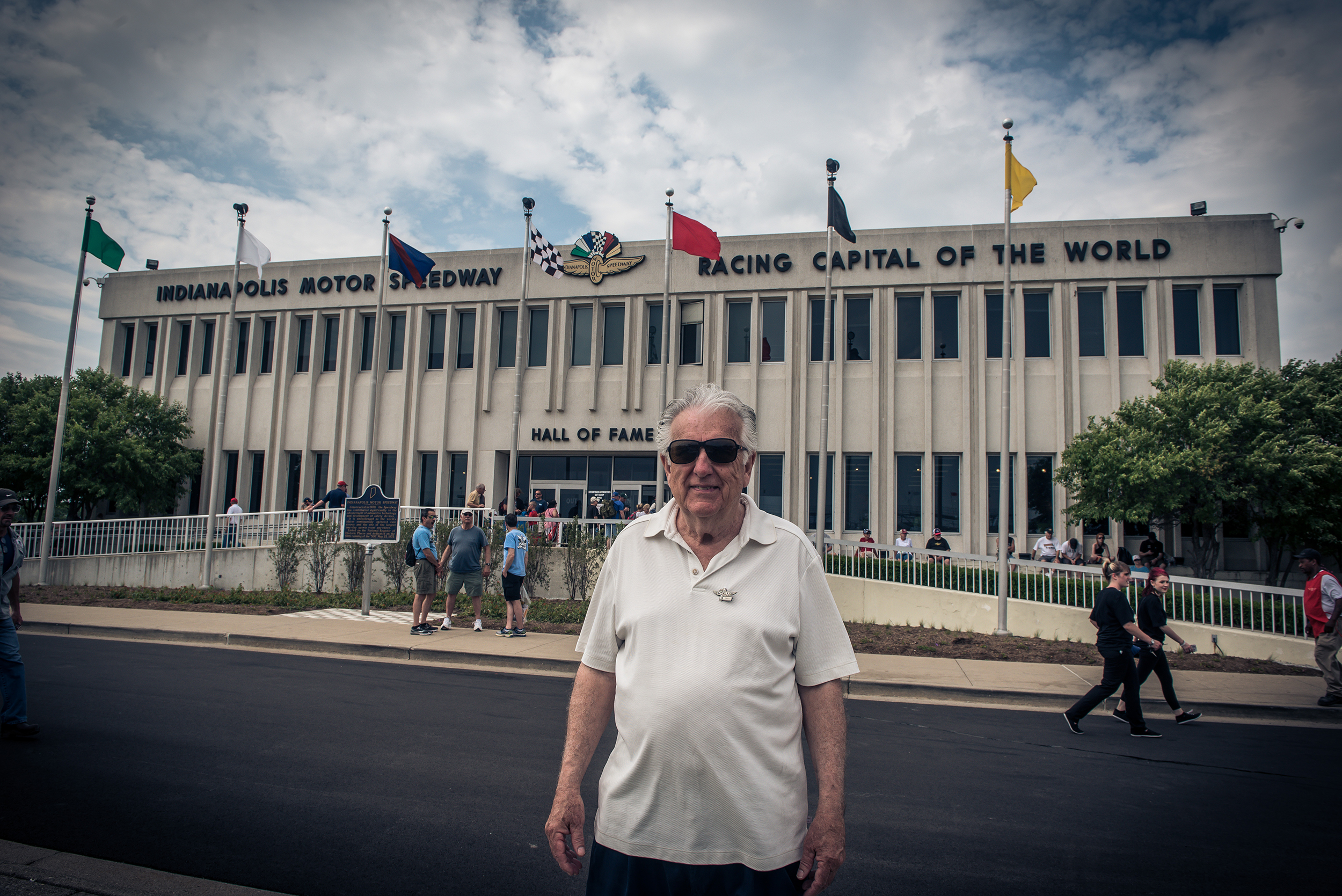 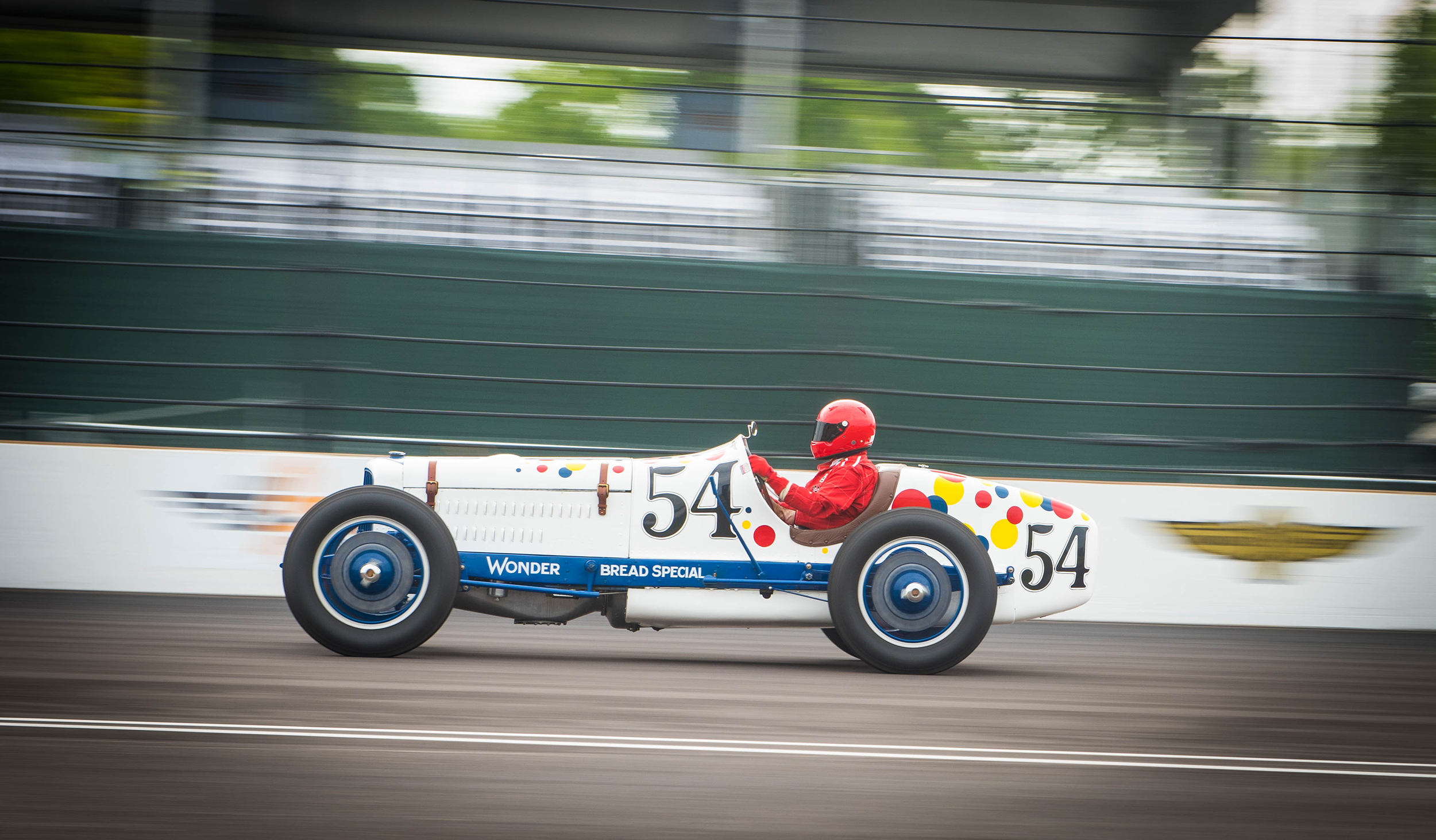 We walked all over that 2.5 miles track  and made our way over to the garage area. We also got an idea of where our seats would be for the 500 on Sunday. With the temps in the high 80’s I was relieved to see we were under the covered area of the paddock. I guess the tables had turned and it was my time to be thinking of Dad and his comfort.

Sunday race day we were up and ready to get to the track. We signed up for the shuttle at the hotel since the race was sold out and the news reports were expecting over 350,000 people.  I was a little nervous to be honest. I’m not a fan of big crowds like this, I’m well aware of the hazards that can happen fast when you have crowds of this size in one spot.  we got to the track and walked shoulder to shoulder to the gate, through the gate and to our seats. we had amazing seats directly across from the pit area and could see all the pre-race entertainment. The parade of vintage cars, the parade honoring our service men and women, the singing of our national anthem and of course “Back home again in Indiana”, it all happened right there in front of us.  This was it, the moment was here, “Lady and Gentleman, start your engines!”  I had been waiting all weekend to hear these cars fire up, and oh man, it was amazing. Mario Andretti lead the field around the track with Lady GaGa as a passenger and he gave her one hell of a ride. The pace car pulled in and the green flag dropped. This was it, he was finally here in person to watch the Indy 500.  We stayed glued to our seats the entire race and enjoyed every minute. When the race ended it took us over 3 hours to get back to the hotel. There were so many people in town that the police closed all incoming traffic down. That meant the shuttle busses could no longer get back in to take groups back to the hotel. Some people chose to bitch, moan and yell about it.  Me and dad found some shade and another older gentleman and we just passed the time talking. Turns out this was this gentleman’s 58th time watching the Indy 500.  He was 83 years old and has been watching this race live for a long time. We made it back to the hotel safe, got some food, watched the recording of the race and recalled the wrecks and action as they unfolded on TV. 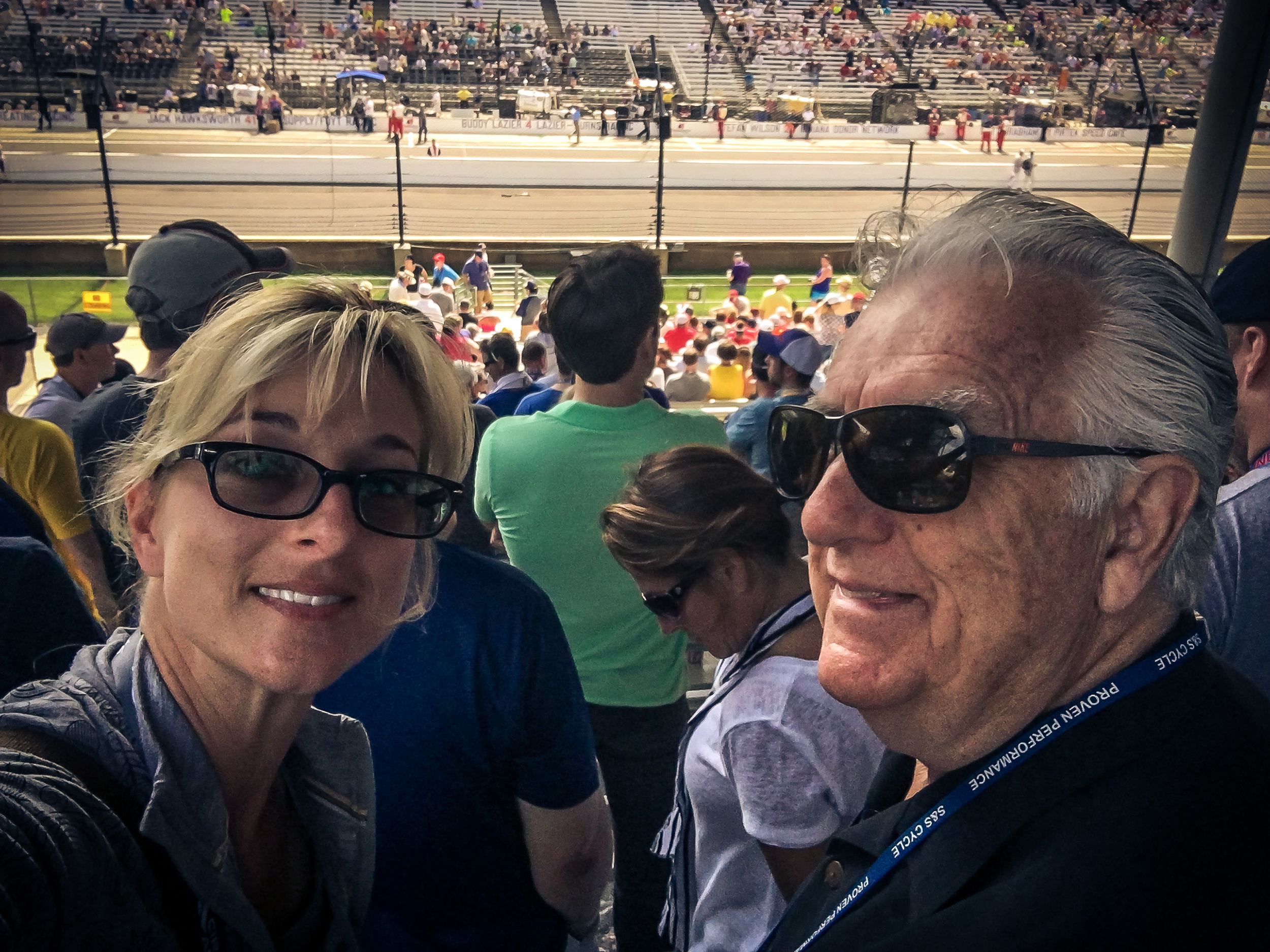 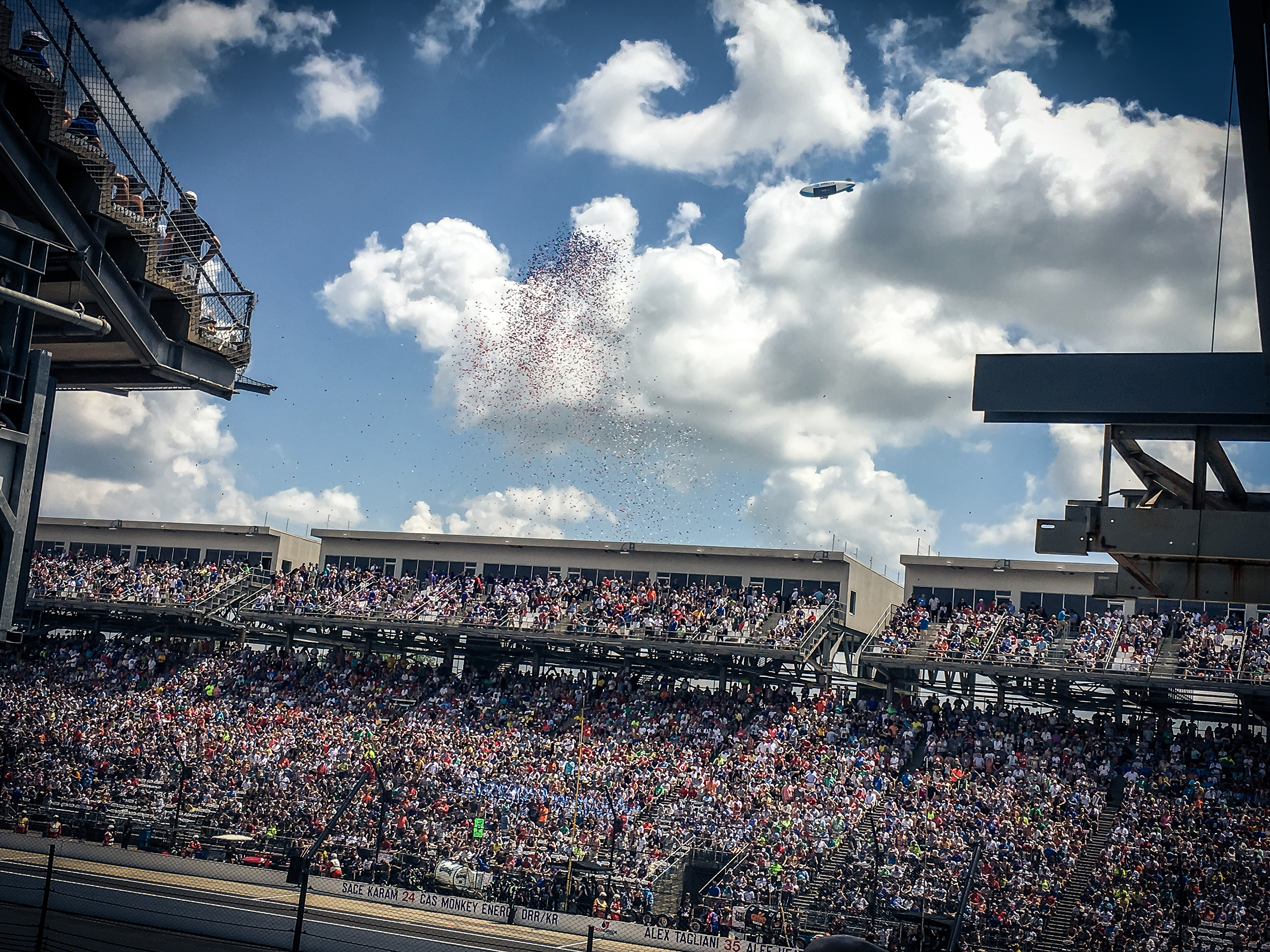 Monday morning we loaded back up the Dodge Mahal and were east bound and down. We cranked some Johnny Cash for the ride home and made tracks singing and smiling.  Thanks Dad for making me the race fan I am. I couldn’t have picked a better person to share this experience with. I still can’t believe it, me and my Dad were at the 100th running of the Indy 500 in 2016 together!