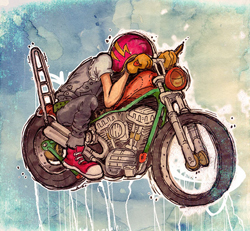 So you gotta check out our Good Bud Scout’s page, Bikereader.  It’s full of images and words of what is exactly going on in our riding world today.. You ever get the feeling that  even though cuz you ride you really don’t fit or can be identified as a biker?  Well Scout’s got that figured out and gives you a little taste of how we as enthusiasts belong to a far more deeper identity than just “biker”

From Bikereader….”What is this new scene that is comprised of a somewhat younger breed of rider on modified cruisers rippin’ our streets? Well, it’s not a “biker” scene. The contemporary biker image is different that what is seen in this new scene. Though the roots overlap in ways, the new scene feels like a reaction to the macho, tough-guy, simple biker image. There are several types of bikers these days as I see it, and this new phenomenon doesn’t seem to apply to any of these current biker factions in my OPINION. The biker image has blown into something that it originally wasn’t. The label has been hijacked into a meaning that is soft, superficial and commercial. This younger scene seems to have qualities compared to what can be found in the dawn of the current American biker icon.
This new motorcycler is less of what bikers are now, and more of what bikers were in their beginnings. From the vocal SoCal period-correct vintage purists, to the open-minded Limpnickie collective around the country, to the Chicago area hardcore riders, to the art/chopper mix in the East Coast, to the performance-inspired younger guys that sort of sprouted from the Big Twin aftermarket, to the isolated skaters on club-inspired later models, to the anything-goes unapolegetic youth Horse magazine subscribers on their first chop, to the Quad Cam Bastards who are proving Sporsters aren’t girly bikes, to the street tracker guys who got ideas from Dave and Dustin… When somebody dubs them a biker it doesn’t seem to make sense. The wrong image comes up.