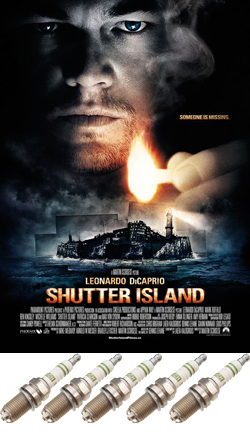 Lets start this off by filling you in on the main character played by Leonardo DiCaprio, Teddy Daniels, a tough guy Marshall  who gets called out to a remote psychiatric ward off the New England shore, It’s a facility where dangerous maniacs are subjected to unique “treatments” by the questionable Dr. Cawley (Ben Kingsley) and his loyal staff of physicians, nurses and heavily armed corrections officers.
Now we can’t get too involved in the description of this flick or we will end up giving it away, and that would not be cool…. This flick is too damn good to spoil for anyone, even if we don’t like you!
Teddy arrives on Shutter Island (seasick no less) with his new partner Chuck (Mark Ruffalo), determined to get to the bottom of a case involving a female inmate  named Rachel Solando, who vanished from her cell without a trace. Rachel is unstable and dangerous: she was sent to the Island after murdering her three children and arranging them around the dinner table for her husband to find.
We have to point out this film was directed beautifully by one of our favorites Martin Scorsese, the imagery was visually stimulating, even for Sara the critique of all things visual, still imagery or film.
Teddy and Chuck start to dig deep into their investigation when they find themselves up against a wall, no one is willing to talk, not the patients, the staff and more importantly not Dr. Cawley, or Dr. Naehring (Max Van Sydow). Teddy and Chuck two WWII vets who both know first hand from experience what true evil is, start to have their suspicions and realize they have stumbled onto something much larger than what they thought.
This psychological thriller was beautifully crafted and visually amazing.
we were intrigued by the intelligence of the film, it’s characters and the authenticity of depicting the era and struggles of soldiers bordering on “keeping it sane after all they have experienced.”  This is a suspenseful thriller that will leave you in “awe” when it all unfolds!
Go see this movie, we give it 5 spark plugs, one of the best we’ve seen in a long time.