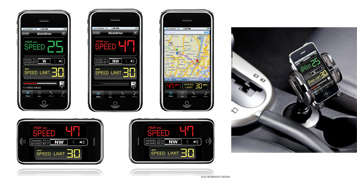 Need some help keeping it under the speed limit?
Check this out from AsafeDrive…
this slick little devise is aimed at helping people maintain their car speed within the legal speed limit, as well as promoting a hands-free environment in the car.
the release of the new 3.0 version for their highly-innovative mobile platform device is now available within the Apple App Store within iTunes or at www.asafedrive.com. The 3.0 version is priced at mce_marker.99 with all of the newest bells and whistles. This one-of-a-kind application is driving GPS technology to the next level by eliminating unnecessary speeding tickets as well as reducing the number of accidents that occur each year as a result of speeding. The unique app has recently been upgraded and though previously it specifically aimed to help commuters maintain vehicle speeds within legal limits throughout the Los Angeles area, the 3.0 version can now be used worldwide. The upgraded version is now updated with new speed limits daily in which users can input to be reviewed and approved by ASafeDrive staff. The upgrade also includes a viewable map screen that will tell you how fast your vehicle is moving in relation to the current area speed limit.  ”Today, speed-limit signs are often times misleading and hard to see, making driving a personal peril,” reveals entrepreneur Alex BenBassat, who designed ASafeDrive after purchasing the very first generation of Apples iPhone. “For the first time on any mobile platform, ASafeDrive gives drivers the necessary information to be able to stay within the safe legal driving limits. There is no other iPhone app that shows two pieces of information simultaneously on one screen: the speed limit of the street and the speedometer.”  The application has rightfully taken its place as one of the only speed-limit programs that utilize GPS POI Data (Street Data) as well as reverse geo-coding with Google Maps. The application’s full-screen, easy-to-read interface shows the commuter’s current driving speed in accordance with his car speedometer and compares it to the accurate street-limit data of his current location.   The application stands apart from a standard speedometer found within the vehicle as ASafeDrive™ displays colors from green to red in line with the driver’s current vehicle speed, thus keeping drivers’ eyes on the road and their acceleration within legal limits. The customizable program allows users to change the settings in the application to access a number of different warnings once the current speed limit is exceeded.
ASafeDrive 3.0 features:  A large, easy-to-read interface displaying automobile speed using GPS and the speed limit of that street.  Color-changing speedometer with customized warnings (visual, vibrate, or sound). The ability for users to input speed limits into the program’s online database. Ability to leave speed limit feedback that will be incorporated into the content of ASafeDrive’s blog at: http://asafedrive.com/blog. Worldwide Speed Limit Access.
Daily updates via ASafeDrive and the ability for users to input speed limits
A map screen that will tell you how fast your vehicle is moving in relation to the current area speed limit.