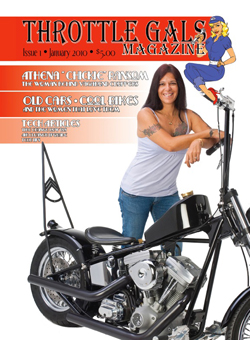 We wanted to share this with you guys, our very own Garage-Girl Trish from Baker Drivetrain is also partner in Throttle Gals magazine, a
different kind of hot rod magazine, one in which the women who are featured are also the owners of the vehicles.
Throttle Gals features awesome women, with bad-ass rides.
Co-founders, Doni Langdon and Trish Horstman, realized there was a definite hole in the publishing industry. There are women’s magazines, and there are bike, automotive and off-roading magazines.  When asked about the new publication and its format, Doni replied, “Rarely do these magazines intersect, even though the number of women participating in auto sports is on the rise. A lot of women aren’t satisfied riding on the back of a bike, or in the passenger seat of her ol’ man’s hot rod.  They want to be in control of the machine, not just along for the ride.”  Langdon and Horstman are on a mission, fill the gap between the types of magazines by having an outlet for the women who deserve the spotlight. Throttle Gals is that magazine.
Throttle Gal features women who build, ride and work on cars, bikes, trucks… anything with an engine!  Its premiere issue featured Athena Ransom, owner of Vagabond Choppers as its cover story, along with Amy Baas and her daily driver ’48 Dodge truck;  Janell Bennet and her intriguing collection of cars, and many other exciting and capable women. Upcoming features will include Leslie Porterfield, who holds a land speed record on the salt flats of Bonneville and Casey Coker from Coker Tire, along with many other fantastic women. Each issue also contains tech features, ranging from entry-level topics such as tire changing and fluid changes, to more advanced tech features such as forming metal, painting, and engine/drivetrain tech. Throttle Gals honors women from the past, who have pioneered our way, as well as those who are pushing the limits of today.
You can find Throttle Gal Magazine info online at www.throttlegals.com.  Both print and digital versions of this pioneering magazine, and a full preview of issues will be posted on its web site.
For more information contact-
Doni Langdon – editor and publisher, and founder
doni@throttlegals.com
www.throttlegals.com