Leslie Porterfield is fastest woman in the world on a motorcycle 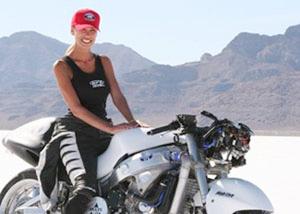 According to the Guinness book of world records on march 12th, Leslie Porterfield has earned the title of fastest woman on a motorcycle.
She won the honor for reaching 232.522 mph during the last BUB Bonneville Salt Flats trials, riding a 2000 cc turbo-charged Suzuki Hayabusa.  It takes time for the FIM (International Federation Of Motorcycling) to officialize a record, and even more so for the Guinness Book to publish.  Leslie now has her eyes set on the fastest person in the world as she is prepping to be at El Mirage, California in May and then again at the salt flats Bonneville.  Leslie also operates a motorcycle dealership in texas, High Five Cycles.