Dennis Hopper, one of our favorites gets Hollywood Walk of Fame Star 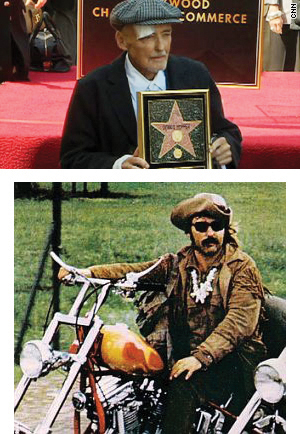 Dennis Hopper attended the dedication of his star on Hollywood’s Walk of Fame on Friday March 26th, but it might be the last time his fans see the actor alive.
Hopper, whose acting career spanned almost six decades, is dying of prostate cancer, according to documents filed in his divorce case this week.
His breakout role was in 1969, with the movie “Easy Rider,” but his career began in the 1950s with live TV and co-starring roles in two films with James Dean. He was twice nominated for Oscars. Hopper, 73, is undergoing radical chemotherapy for advanced, metastasized prostate cancer, his doctor said.
He is too weak and ill to be questioned by lawyers in the divorce, but attending Friday’s ceremony “is a positive experience in every way,” his doctor’s sworn statement said.
“I believe the ceremony honoring his career may be something which he will actually enjoy in the company of his daughter, who he hopes will attend with him,” Dr. David Argus said.
Hopper, who weighs “a little over 100 pounds,” is “extremely weak and extremely ill, and he tires very quickly.”
Hopper became a Hollywood sensation for “Easy Rider,” the 1969 film he directed and co-wrote in which he played a dissolute, countercultural biker named Billy. Some of Hoppers lines from that movie have become religious quotes for many riders including us. Lines like “The man is at the window, the man is at the window” and “Getting pretty smashed man”, and of course “Hey, man. All we represent to them, man, is somebody who needs a haircut. “
We will be keeping Dennis Hopper in our thoughts and prayers… man…….