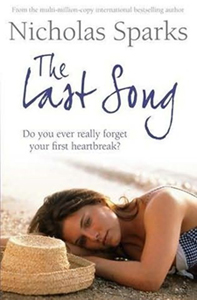 I was over my friend Jill’s house last week. We often share books. She gave me “Last Song” and said that it was so good, I had to read it. I have seen the previews for the movie and it looked really good so I assumed the book would be too. I told her give me a week or so to read the book and then we could go see the movie. (We are going to see the movie this week.)
I started reading the book Thursday and finished it Monday. I couldn’t put the book down! I absolutely fell in love with the characters.
As most of Nicholas Sparks’s books, it takes place on the shores of the Carolina’s. Ronnie and her brother Jonah are forced to spend the summer with their estranged father on the beach. Ronnie and her father share the love of music, particularly the piano but Ronnie gave up music when her parents divorced and her father left. Ronnie quickly makes friends with the wrong people and soon realizes it. As Ronnie becomes involved in protecting the endangered sea turtle she meets a local boy, who she discovers is more down to earth than she thought.   And since I don’t want to give away the entire book I’ll leave it at that….but  I can suggest you reading it! You won’t be disappointed.