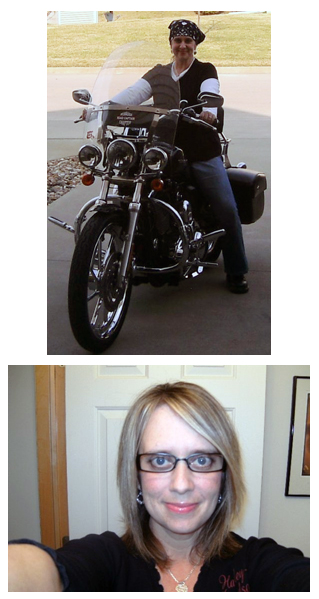 My life has been a yo-yo ride of weight loss and gain. I’ve lived like I’m indestructible and never really cared about my health. I was the person who would sit and watch the Biggest Loser while eating a Big Mac and large fries. Simply put, I was a mess!
In the spring of 2009, as I was thinking of our Sturgis trip in the fall, I decided to try P90X and change my eating habits. I worked hard at it and was seeing results. Weight was dropping off me. I was excited with the lighter me that went to Sturgis that year. I had lost about 20lbs. When we got back from the trip I posted photos from Sturgis on my blog and on Facebook. People kept asking who the skinny girl was. I thought nothing of the comments because I had been working out a lot before the trip. About a month after Sturgis my vision began getting blurry. It got to the point that I was having difficulty seeing so I decided to have my eyes checked. The eye doctor at Lenscrafters was very concerned and told me that I needed to see my family doctor that Monday. He told me that he believed something was wrong with my health. I went to the doctor and he sent me to an eye specialist. The specialist told me that he felt I needed to have blood tests and he also wanted me to see another eye specialist. That specialist also thought I needed to have blood tests. I made another appointment with my family doctor to have blood tests. My husband Dan drove me to the doctor because by then I wasn’t able to see well enough to drive. I went in and had the blood tests while Dan waited in the car. As I was returning to the car a nurse came out after me. She said I needed to come back and see the doctor. I walked to the car and told Dan I needed to go back in. He went in with me to wait for the doctor. The nurse told me that my hemoglobin level was so low they were surprised I could even walk. The doctor told me he was sending me right over to John Stoddard Cancer Center because he believed that I had Leukemia.
The ride to the hospital was the longest of my life. I was crying, I was dumbfounded. How was this happening to me? I met with the Oncologist and his nurse, that my doctor referred me to. I was admitted to the hospital that day. That day I received 9 blood transfusions and I also received platelets. A few days after being admitted my Oncologist finally came in and diagnosed me with having Hairy Cell Leukemia. I was moved to the Oncology floor of Methodist Medical Center and spent 29 days of my life there. I underwent 7 straight days of chemotherapy.
During my stay I had a lot of time to think. I thought of how I haven’t lived my life to the fullest. I thought of how unhappy I’ve been throughout my life with how I look and never being “thin” enough. I thought of all the times I’ve sat and watched when I should have been out there living.
The day I went home was so scary. A person really becomes attached to the health care providers that they see everyday. I swear I took my temperature every 1/2 hour. Day by day I became stronger and would make myself walk around the block. When you are not active you lose allot of strength. I needed to get that strength back so I decided to begin working out again. I lost 40lbs because of Leukemia. 40lbs that I needed to lose but having Leukemia wasn’t really how I wanted to lose it. I turned it into a positive though, this was going to be one of the good things that I got out of all of this. I vowed to get healthy. Dan and I purchased a treadmill and I started walking on it daily. One day Dan was showing me some Pod-runner Pod-casts. One of the pod-casts caught my eye, it was called Intervals 1st Day to 5k. At that moment I decided to train for a 5k run. It was slow going at first. I’ve never been a runner. I was always the slowest kid in school when it came to the Presidential fitness 1 mile run test. The first week I was able to run a mile in 18 minutes. When I got to week 5 I was at 13 minute miles. I made it to week 10 and am now able to run a 5k on the treadmill in 40 minutes. What a huge accomplishment for me. I’m feeling the best I’ve ever felt. I’m on my way to being a healthy, sexy, strong woman. The woman that has always been inside me but took 41 years to find. No one is stopping me now. Currently I’m working on the Pod-runner Pod-cast Gateway to 8k.
This bump in the road opened my eyes to life. We don’t realize how much we take life for granted. A person needs to be in the mindset that one can’t put things off until tomorrow because tomorrow may not come. DO IT NOW! Become the best person you can be. Don’t wait like I did because a disease like Leukemia smacked you in the face. I was lucky. I got a second chance. Take your first chance and run with it. Live your life NOW!
Editors Note; a HUGE thanks to Stephanie for sharing her story with us all.  To stay in touch with her please visit her blog at IowaHarleyGirl