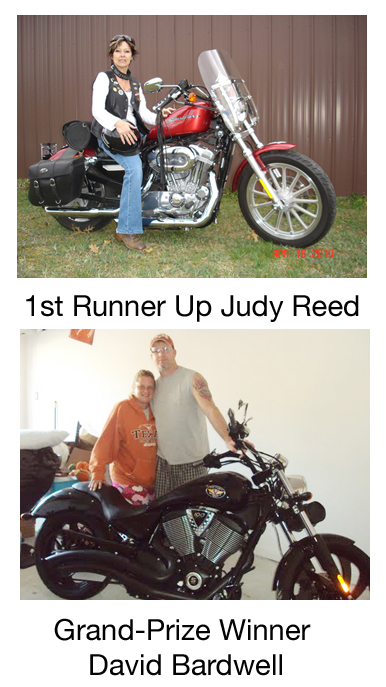 Garage-Girls and Carlisle Events are pleased to announce the winners of the 2010 Ultimate Biker Makeover…..  Runner up is Judy Reed and the grand prize winner is David Bardwell.
The two contestants were chosen along with Kathy Redman from a group of over 20 submissions of who was most deserving of an Ultimate Biker Makeover. The final 3 were then placed up on garage-girls.com for public voting.   The final 3 all had compelling stories of why they were in need of the makeover, but after the publics vote the 2 winners have been chosen.  Runner up Judy Reed is a 52-year-old rider that desperately needs help fitting her bike to herself
Grand Prize Winner David Bardwell has been down on his luck after losing his job at a Chevrolet dealership and has been forced to sell his house and possessions to care for his family. Both winners will be getting hooked up with…new riding Jacket and Gloves from Z1R, a Vega helmet, HD Footwear boots, a cleaning kit from Wizards Products, a years subscription to IronWorks Magazine, a case of Synthetic oil from Spectro Oils, a pair of riding glasses from 7 Eye, T-shirt from VaVaVroom, and a technology case from Otterbox. David, the grand prize winner, will also be scoring parts for his motorcycle such as, accessories from Kuryakyn, A set of AVON Tires, a Mustang Motorcycle seat, and lots of other goodies.