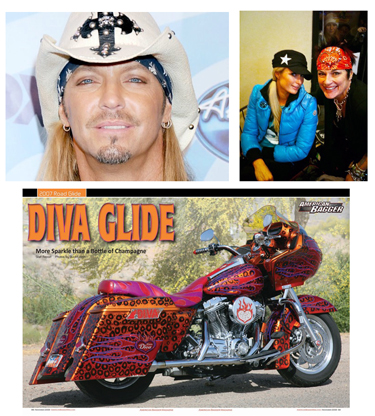 If your a girl and like to ride motorcycles then chances are you know who Diva Amy is, you can’t miss her with her leopard blinged out dresser. Did you also know that Amy is the designer for the most popular cowboy hat in the country right now?
Ever since he made his appearance on the Celebrity Apprentice Bret Michaels has made Amy’s design of the white cowboy hat with black roman cross the #1 selling hat.
Television viewers everywhere got to know POISON lead singer Bret Michaels all over again when he appeared on and won this most recent season of “The Celebrity Apprentice”. Throughout the show, Bret wore three of the eight cowboy hats handmade by Diva Amy exclusively for Bret, including a white hat emblazoned with a black Roman cross, and a black hat adorned with feathers and a spark plug. During the finale, Bret passed around Diva Amy’s other hats to his team members to wear for his Snapple presentation.
“To thank Bret for wearing my hats, I’m donating 10 percent from the sale of each hat to the Bret Michaels Foundation, which in turn funds the American Diabetes Foundation, the group for which Bret was playing on ‘Celebrity Apprentice’.” Michaels also wore the white cowboy hat with black cross when he appeared on the finale of “American Idol”, and can also be seen wearing it on every bottle of Bret’s Blend Diet Snapple Trop-A-Rocka.
Diva Amy created her company, Team Diva, 12 years ago to design hats, T-shirts and accessories with rock and rollers and motorcyclists in mind. In addition to Bret, other celebrities who wear Team Diva hats include Paris Hilton, who sported the embellished cadet caps at the Sundance Film Festival last year; Ringo Starr, who bought a few cowboy hats; and Miley Cyrus, who has been seen wearing the “Bret Michaels” hat. All styles are original by Diva Amy who painstakingly applies all the nail heads, semi precious stones, Swarovski crystals, leather and other embellishments on her creations herself.
To learn more about the Bret Michaels hat, visit TeamDiva.com.