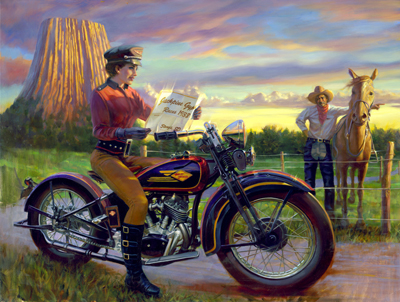 titled “70 & Counting” .  Since 2005, David has produced a special piece for the Sturgis rally each year.  These previous editions were open through the last day of the rally, when we totalled up the orders and closed the edition.
With the excitement surrounding the 70th anniversary, David is capping the number of available prints this year.  He’s also including a special paper version (also signed and numbered) which will be only be available unframed.
In 1936, Clarence “Pappy” Hoel started an Indian dealership in Sturgis and formed the Jackpine Gypsies Motorcycle Club.  Two years later, the City of Sturgis joined forces with the Jackpine Gypsies to hold the first “rally” (known as the Black Hills Classic) which was highlighted by the championship half-mile race.  David’s subject in “70 & Counting”, a member of a motorcycle club at the time, is on her way to the inaugural festivities when she stops near Devil’s Tower to get her bearings.  We can only imagine that her new cowboy friend wishes she would stay longer!
for more info contact
Greg Rhodes
303-913-4840