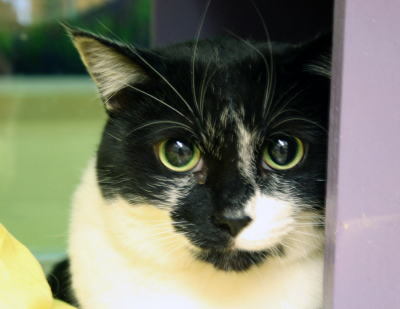 Hailey is a stunning black and white domestic short hair. The first thing you will probably notice is the striking division of black and white running vertically on her nose. She came to Animal Friends because her former owner was moving after having Hailey for 7 years.
She is described as affectionate and sometimes spunky by her former owner. The owner also commented that Hailey was rather cordial when visitors came into the home. Hailey has never been around children but we can discuss whether or not she’d like to meet some.
Hailey loves to be scratched under the chin and on the underside of her neck. She enjoys playing with the usual assortment of cat toys, and she is used to being in a carrier, being picked up, having her nails trimmed, and even being bathed.
Here at Animal Friends Hailey has shown herself to be a little timid, but she responds well to human attention. With her background, she will make someone a wonderful pet. All that is needed is a bit of patience until she understands she is in her Forever Home. Come visit her at Animal Friends today!