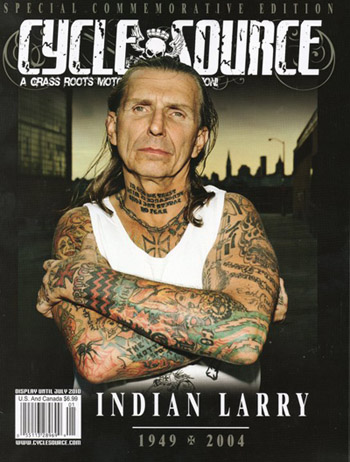 Have you been wanting to find a copy of the Indian Larry issue of Cycle Source Magazine?  Well you can grab a copy and support a true Pioneer of Cycling, English Don, who is in need of a liver transplant at the moment. Chris from Cycle Source has offered these copies to Don to try to raise some funds to get back to the states to get a second opinion on his liver transplant.
The Indian Larry commemorative issue that Don helped put together with Chris Callen from Cycle Source is the closest representation of Larry’s story and the classiest. It has great pictures, prose and is the only publication that has pictures of Don with Larry from back in the day.
This copy was a limited edition for Jan 2010 and has been selling  on e-bay for $30 to $50.
Don hails from London England. He grew up in the time of ‘Mods and Rockers’ and identifies with the ‘Greaser’ bike clubs of the ’60’s and ’70’s. With over 35 years experience in the motorcycle world he has retained a great knowledge of the culture. He co-founded New York Citys 2 legendary chopper shops ‘Psycho Cycles and SD Cycles along with the ‘Bayonet Brothers’ along with chop God , Indian Larry. Don is well known for his ‘Digger Swing-arm’ bikes, the most famous of these being ‘Babylon Taxi’ a 1981 4 speed Shovel-head. This and many of his wild creations have been widely used in TV, film and magazines. Don himself has appeared in numerous books, commercials, videos and documentaries. He is also an accomplished musician, lyricist and stage performer.  To get your copy and support a fellow enthusiast please contact English Don on Face Book at http://www.facebook.com/profile.php?id=1805732303#!/profile.php?id=1805732303&v=wall just send him a message!