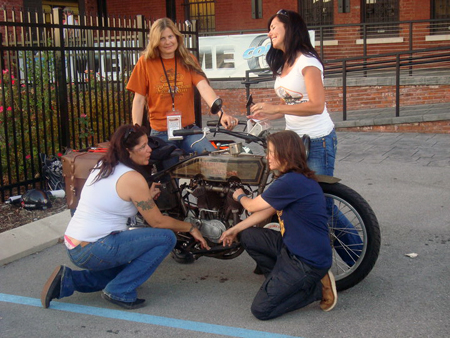 If you have not heard of the Cannonball Run you need to check this site out, some very good friends of Garage-Girls are working together as a team, this is EXCITING!!! Here are Laura’s words about what they are embarking on…..

Ninety five years ago a young woman named Effie Hotchkiss decided she wanted to travel coast to coast. And what better way to do that than on a motorcycle? She purchased a 1915, 3 Speed V-Twin Harley-Davidson with some money she had inherited and was ready to go. That is until her mother, Avis, told her she couldn’t make that trip alone. There were still cowboys and Indians, and paved roads were a luxury, besides the fact that a woman on a motorcycle in those days was sure to draw much conversation and attention. So the deal was made between mother and daughter that Effie would buy a sidecar, and Avis would make the trip with her.

They set out to travel from Brooklyn, New York to the World’s Fair in San Francisco, California. It took them about 2 months, and by the time they were done, Effie had dipped her toes into the water of the ocean on the east coast and the west. The story’s been told that she carried water from one ocean with her and dumped it into the other ocean when she arrived. We know for sure that Effie and Avis made history. Their story is an inspiration to women, and men, even today. Effie lived by the moto that “anything is possible if you put your mind to it.” She inspires me.

This morning, September 10, 2010, 95 years after the trip that Effie and Avis made across the country, I report with amazing pride that I am witnessing history repeat itself. This morning at sunrise, we gathered on the shore of the Atlantic ocean in Kitty Hawk, North Carolina, to collect water in a jar that will travel in the saddlebag of a 1915, 3 Speed V-Twin Harley Davidson as my dear friend Cris Sommer Simmons carries it across the country. I, along with Athena Ransom and Toast Boyd are on Cris’ crew. Cris has named her 1915 Harley Effie in honor of Effie Hotchkiss, a woman that inspires us. She is riding in a coast to coast endurance run called the Motorcycle Cannonball, and the plan is to empty that jar of water from the Atlantic Ocean into the Pacific in Santa Monica, California just 16 days from now. And in true Effie style, Cris and us as crew have become a topic of conversation. Cris is the only American woman entered in the Cannonball, and we are the only all woman crew participating. Our common bond besides our love of motorcycles old and new is that we are all Motor Maids.

Athena, Toast and I arrived in Kitty Hawk on Wednesday night to Cris and her daughter Lynsey doting over Effie – tightening bolts, making last minute adjustments, and preparing mentally for the challenge that lies ahead. It was so awesome to see Cris light up when we, her crew for this journey, arrived. She immediately found the courage to give Effie a kick and ride her around a bit. I watched in awe and encouraged and cheered for her. It felt pretty surreal to think about what we were about to embark on….

Yesterday was spent getting the chase van ready, making sure we had a fire extinguisher, spark plugs, tape, wire, tools, gas, oil…all the essentials necessary loaded into Effie’s saddlebags. As I walked through the parking lot I was truly amazed by the variety of bikes I was seeing! Some I’d never even heard of such as the Militaire. This thing is amazing with the strangest front axle I’ve ever seen. And considering it was designed in the early 1900’s, it’s pretty amazing when the owner shows that it’s rigged up with reverse of all things. Indians, Flying Merkels, Excelsiors, Sears, and of course Harley-Davidsons all 1916 models or older, all being prepped to attempt something that hasn’t been attempted as a group like this ever before. Getting ready to travel just about 3,300 miles, coast to coast! I saw some familiar faces such as Dale Walksler, Buzz Kanter, Jeff Decker, David Uhl, Matt Olson, Carl Olson and many more. And of course the world known motorcycle photographer Michael Lichter. Micheal is actually attempting a Guiness Book of World Records feat by riding the entire Cannonball Run backwards on a seat that Carl Olson build for him on the back of his bike! Additional Motor Maids showed up such as the infamous Gloria Struck, her daughter Lori and granddaughter Kathy, along with Terry and Deb…and you can bet we made some noise at our “all girl” table with a few MOTOR MAIDS ROCK chants during the banquet last night.

It’s all really been a blur. This morning after collecting the ocean water (and some sand in my name badge), we witnessed a history making event. All of the entered bikes (44 of them) rode to the Wright Brothers Monument, and were lined up by Michael Lichter for a panoramic photo. And then they took off for day one of the endurance run from the monument. If something like that doesn’t bring a tear to your eye, then you may want to pause a moment and just try to understand the depth of the history that is being repeated, and made. It hits you in a place that’s deep inside. I looked around me and just couldn’t believe why I am blessed with experiences like this, and knowing that I have to share the story. Maybe it will happen again in my lifetime, maybe not, but I know that I am surely going to cherish every single second.

The support vehicles aren’t allowed to travel with our rider, so we headed out behind the bikes toward the next stop which for today was 162 miles away in Greenville, North Carolina. We parked the van, set up the easy-up and waited for Cris to roll in. This morning when she left I felt like I was sending my baby off to kindergarten and waiting for her to ride in was like waiting to hear how that first day of school went. Athena and I were pacing the parking lot! Toast is along filming this history making event and she found a lot of humor in our reactions.

About an hour later, Cris pulled in! She made it through the first day! She had some challenges and told us she “rode it ugly”. But the first day, the first time, is always when we learn the most right? We sent her off to bed and went to work. We are settling into what our tasks will be for the next 15 days of this journey. I’ve become an expert in the roll charts, refilling gas, oil and the saddlebags with the necessities, and Athena had the honor and privilege tonight of working beside Steve Huntsinger and Dale Walksler as they walked us through some adjustments that were needed for Effie that we understood but hadn’t done before. So, we wrenched on Effie, and talked to her sweet, because her job tomorrow is to carry our friend and Motor Maid sister safely to the next stop. Tomorrow’s ride is 225 miles.

To Effie Hotchkiss, there were no hard and fast rules about how life ought to be lived, particularly according to how social circles of the day dictated the mannerisms of a well-conducted lifestyle.  The motorcycle was the perfect invincible companion to match the tenacity and free spirit of Effie and Avis Hotchkiss. I’m so proud of those pioneer women that went before us. I’m excited that we are bringing attention to an important piece of history, inspiring women of today, and well into the future. Someday maybe our grand kids will read about Cris Sommer Simmons who rode a 1915 Harley Davidson named Effie from coast to coast, 95 years after the maiden voyage, and her all woman crew and feel inspired to do the same! Isn’t that what it’s all about? Honoring the past while we ride into the future. Motor Maids ROCK!