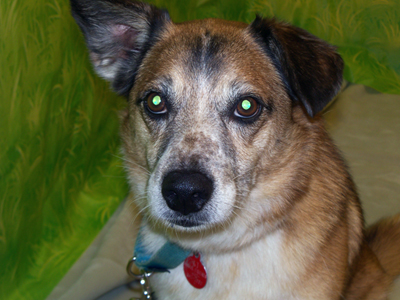 Animal Friends has always been known go the extra mile for a pet in need. For Chuckles, a 9-year-old Shepherd/Australian Cattle Dog mix, those extra miles required a plane ticket.

Chuckles was adopted from Animal Friends several years ago. Recently, she moved with her owner to St. Louis, MO. But sometimes, life doesn’t go as planned. That’s when Chuckles’s owner found that he had to move again and ended up in an apartment building that didn’t allow dogs.

Chuckles found herself in a crowded shelter that is forced to euthanize animals to make space. When Animal Friends received a call from the shelter and learned that one of our alumni was stuck 600 miles away from home, staff and volunteers swung into action. Ultimately, they decided that the safest and most efficient way to get Chuckles home was for her to fly, and a plane ticket was purchased in her name.

Chuckles is now awaiting adoption into a loving home. She is gentle, polite, affectionate, and friendly with people and dogs. She knows several commands including “sit,” “paw” and “down.” She is crate trained and housebroken and would make a fantastic companion for just about any family! Inquire about her today at Animal Friends!