The Government and your Food……… 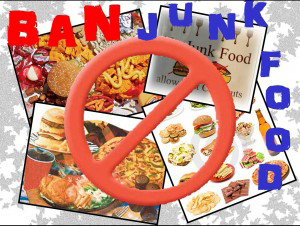 Ok this was just a little too shocking for us NOT to share with you, we found this at “the Blaze” written by Meredith Jessup
New government regulatory crackdowns on certain foods and beverages across the country are forcibly shaping new dietary habits for many Americans. To make things easier, we thought we’d consolidate and break down a number of the bureaucratic overreaches for you.
How is government working to limit your scrumptious individual liberties? Let us count some of the ways…
• As we’ve reported, officials in Boston, Mass., are contemplating a ban on “sugary” beverages from the vending machines of all city municipal buildings in an attempt to whittle down public employees’ waistlines.
• Likewise, San Francisco Mayor Gavin Newsom used his executive order power to ban sodas and other sugary beverages from public building vending machines, replacing them with diet drinks and soy milk products.
• In a separate executive order, the San Francisco Mayor also single-handedly banned the use of city funds to purchase bottled water. “[Bottled water manufacturers] are making huge amounts of money selling God’s natural resources. Sorry, we’re not going to be part of it,” he said.
• In New York, a Brooklyn Democrat introduced a bill in the state legislature earlier this year to ban the use of salt in restaurant cooking.
• The New York Times dubbed the state of California a “national trendsetter in all matters edible” when Gov. Arnold Schwarzenegger signed a bill in July to ban trans fats from the state’s 88,000 restaurants.  “Under the new law, trans fats, long linked to health problems, must be excised from restaurant products beginning in 2010, and from all retail baked goods by 2011.”  Other places that have banned trans fats include New York City, Philadelphia, Stamford, Conn., and Montgomery County, Md. — a suburb of Washington, D.C.
• In perhaps one of the most outrageous cases of regulations restricting small business, health officials in Oregon shut down 7-year-old Julie Murphy’s roadside lemonade stand in August for failing to secure a $120 “temporary restaurant” license.
• Kids may also be also be getting the shaft in San Francisco where officials are launching a campaign to ban “Happy Meals” or any other meals that come with a toy.  The so-called “Healthy Meals Incentive” would ban toys if the food contains too much fat, sugar or salt.  It wouldn’t be the first time meal-time toys would be nixed in California; earlier this year, Santa Clara County approved an ordinance “to break the link between unhealthy food and prizes.”
• New York City has banned school bake sale as part of a new wellness policy that also limits options in vending machines and student-run stores.  Proceeds from the ventures generally used to help help finance school-related activities like pep rallies and proms.
• Under state laws in Texas, a single piece of candy landed a 10-year-old Brazos Elementary School student in detention for a week in May.
• In May, the U.S. Food and Drug Administration (FDA) sent this letter to General Mills, warning that the company’s claims about Cheerios helping to lower cholesterol represent “serious violations” of federal law.
• And in the news today, the state of Florida may become the first in the country to ban chocolate milk from public school cafeterias.  The Florida Board of Education voted Tuesday to remove all sugary drinks in schools, including soda and flavored milk.  The board is considering allowing only three types of drinks for younger children—water, unsweetened juice and plain, low-fat milk.  High school students would be allowed diet sodas and other low-calorie drinks.
Are government regulations limiting your right to tasty foods and drinks?  Send me your stories by emailing mjessup@theblaze.com!