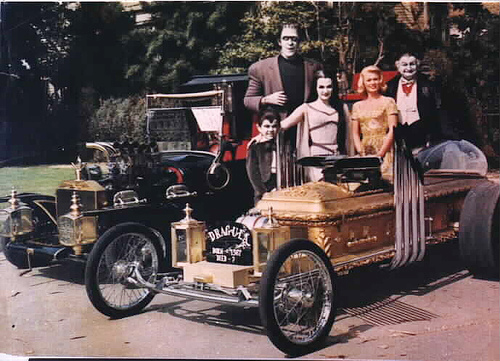 Well here it is October our favorite month of the year, we love everything about this month. The cooler weather, the colors and of course Halloween.  When you think of Halloween and cars what comes to mind….  The Munster Vehicles.  The Munster Coach and Dragula were both built by George Barris and were probably the coolest TV cars of their age.  Barris was the king of customizers in the 60s.    The Munster Coach was the family vehicle, carrying the family on their trips. Where did they go? All the same places any normal family would, and probably a few more (tar pits, bat caves, graveyards, ghost towns). Of course Herman also used it to get to his job at the local funeral parlor.
Dragula was Grandpa’s car, but was usually driven by Herman. It was first seen in the original film Munster Go Home (where Herman raced it on back roads in England) and then became a supporting prop (unfortunately rarely seen) for the remaining year of the television show. The design of the car was basically a dragster (very hip in the 60s), done up in great style by George Barris, and based on – what else – a coffin. The car survived and is hanging over a bar in Chicago. A duplicate was even offered on eBay a couple of years ago.  The Munsters was a great show and it got a lot of kids like myself interested in cool cars.