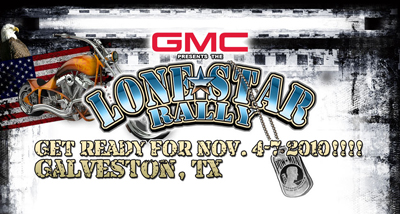 Galveston Texas is home to The Lone Star Rally – the largest motorcycle event in Texas and the second largest weekend motorcycle event in the country. “The event has become so rich and diverse with activity, manufacturers and vendors that you feel like you’re at a major bike week like Daytona or Sturgis,” said Melissa Penland of The Lone Star Rally.

From November 4th – 7th Galveston Island will roar with hundreds of thousands of motorcyclists riding The Strand and honoring the military with an appreciation themed event for 2010. The honorary Post 911 Foundation Follow the Flag Ride for Heroes gathers Friday at 4pm at The Spot, on the Seawall, and weaves its way down the Strand to Pier 21 where the Navy’s Full Steam Brass Band will serenade. All riders are invited to participate. On Saturday at 1pm the Coast Guard will do a search and rescue demonstration off Pier 21. Military displays from various branches will be on display throughout the weekend.

This year the Rat’s Hole Custom Bike Show will make its debut Texas appearance. The Rat’s Hole Show is a 30 year tradition founded by Karl Smith, Sr., aka Big Daddy Rat. If you’ve got what it takes to win the Rat’s Hole Show, show up at the Pier on Saturday morning and flaunt your bike!

Live concerts on three stages (Pier 21, Saengerfest Park and the Limpnickie Lot’s The Pit Bar on the Strand) will rock the rally with a variety of continuous music Thursday through Sunday. And the Baker Drive Train burn out ramp will be the place to show off your burn out skills in head-to-head competition. The Baker Drive Train crew will be on hand to judge the events and Jay Allen of the World’s Biggest Biker Bar, The Broken Spoke Saloon will emcee.