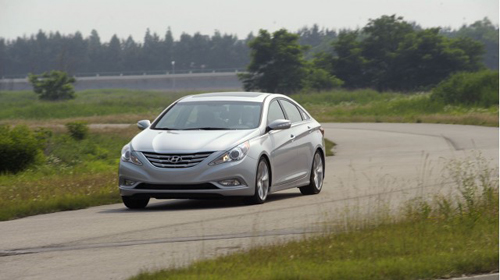 The CarConnection, the easy-to-use car shopping site that reviews cars and the best of the Web, named the 2011 Hyundai Sonata its “Best Car to Buy 2011” as part of its coverage of the 2010 Los Angeles Auto Show, which includes reporting, analysis, photography, as well as real-time Twitter coverage from the show floor.
TheCarConnection’s “Best Car to Buy Award” was chosen from a field of 40 nominees. The winner comes from reviews written by the site’s editors, who road-test nearly every new vehicle introduced each year. Editors rate each new vehicle for performance, styling, utility, features, safety, and assign a green score, then incorporate opinions from the around the Web in each review. The result is a unique, one-stop car rating and review that makes car shopping easier.
The 2011 Hyundai Sonata is a stellar value in all its forms—standard, turbocharged 2.0T, and Hybrid, according to Marty Padgett, editorial director of High Gear Media, and was chosen over finalists such as the 2011 Kia Optima, the 2011 Buick Regal, and the 2011 Ford Explorer.
“The Sonata changes the mid-size sedan game,” Padgett says. “Exceptional safety, fuel economy and standard features make it a must-drive for any new-car shopper.”