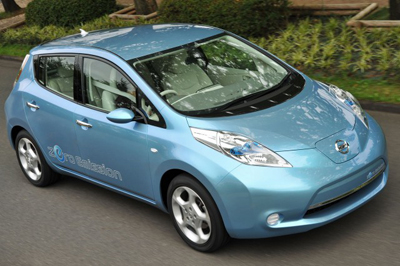 GreenCarReports, the Web’s fastest growing green car information site, named the 2011 Nissan Leaf its “Best Green Car to Buy 2011” as part of its coverage of the 2010 Los Angeles Auto Show, which includes reporting, analysis, photography, as well as real-time Twitter coverage from the show floor.
GreenCarReports’ “Best Green Car to Buy Award” is chosen from a field of the most significant new vehicles with advanced fuel-saving technology, including stand-alone nameplates and single models alike.     Editors judge the award using the same system sister site TheCarConnection employs to rate mainstream passenger cars and trucks, with environmental impact being the deciding factor in favor of the winner.
The 2011 Nissan Leaf makes history as the first mass-market electric vehicle offered for sale in the U.S., according to John Voelcker, Editor of GreenCarReports.  The Leaf was chosen from among finalists such as the 2011 Chevrolet Volt, 2011 Hyundai Sonata Hybrid, 2011 Lexus CT 200h, and the 2011 Honda CR-Z.
“The 2011 Leaf is a huge step for green car shoppers as they try to kick the oil habit and move on the grid,” Voelcker says. “The Leaf simply acts like any conventional passenger vehicle, but one with a purpose—to turn on car shoppers to electric cars, for once and for all.”
GreenCarReports reports on what’s coming in the auto industry’s future, and explains how the green movement matters to car shoppers today.