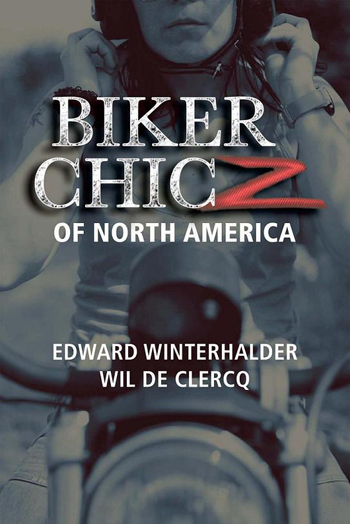 Add this read to your Christmas wish list, you probably even know some of these stellar ladies and we here at Garage-Girls are proud to call most of them friends and fellow Garage-Girls.
In Biker Chicz of North America, Edward Winterhalder and Wil De Clercq have compiled in-depth profiles of twenty-two fascinating women who ride Harley-Davidson motorcycles. Each chapter features an individual whose life story is compelling, intriguing, fascinating, and inspirational.
Global studies indicate that 12 to 18 percent of motorcycling enthusiasts are women. The number of women motorcycle riders in North America has increased exponentially since the early 1990s, and that exciting trend continues. American Motorcycle Industry Council statistics indicate that over one million new motorcycles were sold in the United States in 2008. Of that impressive number more than 100,000 were sold to women.
While each woman featured in this book is unique and extraordinary in her own right, there are, not surprisingly, certain attributes they all have in common. In addition to being avowed motorcycle riders—they live to ride and ride to live—they are successful, intelligent, freethinking, adventurous, creative, inspiring, and tenacious. They are women who have followed their dreams and dared to live life on their own terms. All are survivors who boldly took on challenges that many of us—men or women—would find daunting. Some of them came by their success easily, others by triumphing over adversity.
Despite their common traits, most are as different as night and day. Some are introverted, others extroverted; some are family oriented, others are loners. They’ll be the first to admit, however, that without their Harleys, they would not be who they are today. Their beloved motorcycles are what defines them and what sets them apart from their nonriding sisters.
The Chicz are: Cris Sommer-Simmons, Mandy Rossmeyer Campbell, Lucky Belcamino, Gevin Fax, Becky Brown, Betsy Huelskamp, Gina Woods, Laura Klock, Deborah DiMiceli, Vicki Roberts Sanfelipo, Pepper Massey, Sasha Mullins, Lorrie Penteluke, JoAnn Begey Bortles, Freedom Conklin, Meg Mc Donough, Marilyn Elmore Bragg, Katmandu Palmer, Gloria Tramontin Struck, Banshee LaDucati, Andrea Perrino and Danni Stockley.
About the authors:
Edward Winterhalder lives in Oklahoma and is one of the world’s leading authorities on motorcycle clubs and the Harley- Davidson biker lifestyle; his books are published in multiple languages and sold all over the world. He was a member, and/or an associate, of outlaw motorcycle clubs for almost thirty years.
The creator and executive producer of the “Biker Chicz” and “Living on the Edge” docu-reality television series, Winterhalder has appeared worldwide on television networks such as Bravo, Prime, CBC, Fox, National Geographic, History Channel, Global and History Television. In addition to his literary endeavors, he is a consultant to the entertainment industry for TV, feature film and DVD projects that focus on the Harley-Davidson biker lifestyle.
Wil De Clercq has worked as a freelance writer and editor, visual artist, and in such diverse fields as demolition, the merchant marines, faux finish painting, advertising copywriting, and film and television production; he has been a dynamic force in the world of motorcycle journalism for more than twenty-five years and lives in Ontario, Canada.