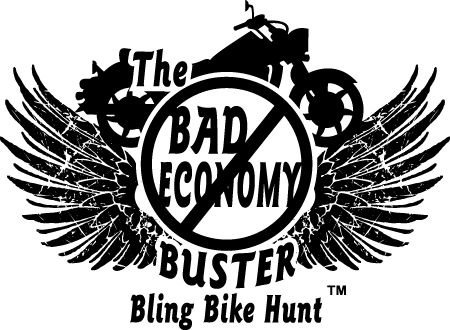 Sent to us from VT race girl, Valerie Thompson here is your chance to land the keys to a Sucker Punch Sally’s Sled!
Valerie tells us the Purpose of “The BAD Economy” Bling Bike Hunt is multifold.  First, to take responsibility for improving things ourselves and not rely solely on the government; second, to dramatically increase foot traffic over the holidays and into the New Year for participating merchants, and three to have some great fun doing it.
The BAD Economy Buster” Bling Bike Hunt goes like this:
◦The keys to a custom motorcycle built by none other than World Renowned Sucker Punch Sally’s of Scottsdale, Arizona will be hidden no later than February 1, 2011- somewhere in the Great State of Arizona.  The value of the motorcycle will be approximately $35K+
Weekly clues as to its whereabouts will be distributed through participating merchant stores.
Clues (via website access ID’s) will be distributed each week for 9 weeks beginning February 1, 2011. A new clue will be posted weekly on the ‘bikerhunt.com’ website for 9 weeks.
Be sure to check out the website www.bikerhunt.com for all the info on how you could end up winning the set of keys to the SPS bike!