How Creative is Your Child’s School Lunch? 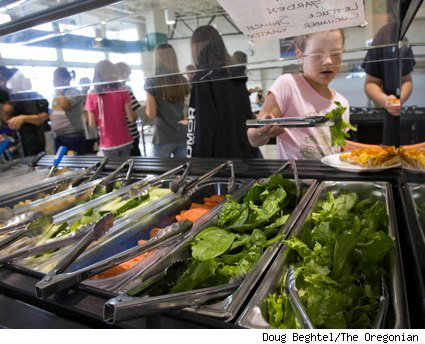 By, Alyson Walls
Much has been written over the past few weeks about passage of the Child Nutrition bill, known as the Healthy, Hunger-free Kids Act of 2010. As children head back to school in the new year, I decided to dig in and take a closer look at the new legislation.
In doing some initial research, I discovered an interesting blog called Fed Up with Lunch. It’s the story of a Chicago-area public school teacher, “Mrs. Q,” who ate, photographed and wrote about 160 elementary school lunches — one per school day for a year.
In writing the blog, Mrs. Q, who protects her identity for fear of losing her job, learned that for kids and adults, “food is personal, food is life, food is health.” She ultimately changed her own eating habits, began cooking healthier for her family and became an accidental crusader for school lunch reform. (Her photos of unidentifiable meat and grease-slogged pizza from the cafeteria alone are proof school children need healthier lunch options.)
Read the blog here: http://fedupwithschoollunch.blogspot.com/
Enter the Healthy, Hunger-free Kids Act of 2010.
The bill, championed by First Lady Michelle Obama as part of a strategy to combat childhood obesity and hunger, aims to expand the school lunch program and provide children with better access to healthier foods, including more fruit and vegetables. It sets new standards for school cafeteria foods, as well as those sold in vending machines and offered through school sales.
Proponents say the bill will help address problems including childhood obesity, poor nutrition and hunger. Opponents say it’s just another example of government intrusion, now in school kitchens.
Among other things, the new bill, which reauthorizes the Child Nutrition Act first enacted in 1966, provides the first increase in federal support for school lunches in 30 years — 6 cents per meal above the inflation rate.
The bill isn’t perfect – no legislation ever is – however, with childhood health problems increasing and visual proof in Mrs. Q’s blog that school lunches leave a lot to be desired, it does offer a starting point for providing healthier meals for the children most in need (those receiving free or reduced-price school breakfast and lunch).
While reducing childhood obesity rates goes beyond offering kids plastic-wrapped carrot sticks and syrupy fruit cups, a recent article in The Washington Post outlined five myths about school food, including the notion that kids won’t eat anything green.
Schools in Compton, Calif., have introduced salad bars, which are now one of the most popular options for students. In New Orleans, a school chef conducts fruit and vegetable tastings with kindergartners – one for each letter of the alphabet – as they learn their ABCs (Apples, Bananas, Carrots, Daikon radishes).
Education goes a long way toward helping kids and adults make healthier choices. For example, in a San Francisco Elementary school, children made “funny-face” sandwiches using pita, hummus, raisins and raw spinach, with the school’s nutrition coordinator. What’s more, they actually ate them! In fact, research has shown that when presented with healthy foods in creative ways, kids will try, and perhaps even enjoy, eating them!
Read about the funny-face sandwich lesson here:
http://motherjones.com/environment/2010/12/taste-change-flynn-elementary
Teachers around the U.S. say they have observed students eating all sorts of stuff that is “good for them,” especially if they first encounter the food in a school garden or classroom cooking demonstration, help to plant seeds or harvest vegetables as part of a science lesson, or meet the farmers growing their greens.
However, studies overwhelmingly confirm kids are far less likely to try healthy foods on their own, especially if there is a vending machine filled with junk food nearby.
School officials and nutritionists agree that federal legislation can do only so much to get kids to eat balanced meals. We need to do more for both adults and children in terms of increasing nutrition knowledge, presenting food in creative ways and making sure that what we offer in the cafeteria reflects what we are teaching in the classroom and what is reinforced at home.
Education, creativity and fun go a long way with kids in general, not just in terms of healthy eating. When I student-taught Kindergarten a few years ago, I actually observed this. Give a kid a whole orange on her tray, and she probably won’t take the time to peel or eat it. But cut it in quarters, take a big bite and make a silly smiley face with the peel in your mouth, and just watch how fast they all do the same.
Read more about the myths of school lunches here:
http://www.washingtonpost.com/wp-dyn/content/article/2010/12/17/AR2010121702561.html