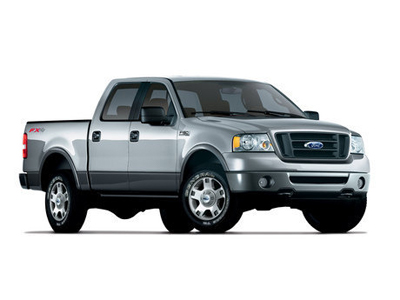 Ford is recalling 144,000 of its popular F-150 pickup trucks to repair airbags that may deploy without warning, a defect that has led to dozens of injuries, government safety officials say.
The decision is a reversal for the nation’s No. 2 automaker, The Detroit News reported. Ford had steadfastly refused to recall the pickups in the face of federal government pressure. Still, the recall isn’t as broad as regulators wanted.
The recall action involves F-150s from the 2005-06 models years “for a relatively low risk of inadvertent air bag deployments,” Ford spokesman Wes Sherwood said late Tuesday. Most of the vehicles — 135,000 — are registered in the U.S., with the remainder having been sold in Canada.
The National Highway Traffic Safety Administration sent a letter to the Dearborn, Mich.-based automaker about a month ago, asking it to recall some 1.3 million F-150 pickups from the 2004 to 2006 model years, after receiving reports from dozens of people about unexpectedly deploying airbags that resulted in injuries, the News reported.
The injuries included chipped and broken teeth, cuts to the arm, hand and face, lacerations and minor burns, NHTSA found in its investigation, which has been ongoing since September 2009. Two owners reported a loss of consciousness as a result of air bag deployment.
Ford resisted recalling the trucks, it said, because the number of incidents was low, the injuries were minor and “consumers received adequate warning” as a result of an illuminated air-bag warning light that alerts drivers that the vehicle needs to be serviced, the News reported.
Still, Ford on Tuesday said it would work with the government to deal with the defects. “Ford is committed to safety and will continue to work cooperatively with NHTSA in addressing any further questions,” Sherwood said.