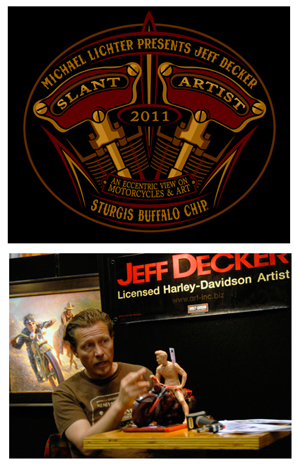 The Legendary Buffalo Chip is proud to announce this year’s distinctive yet unconventional theme for Michael Lichter’s 2011 Motorcycle as Art exhibition. Sure to be a spectacle of a masterpiece, this year’s exhibition, “Slant Artist-An Eccentric View on Motorcycles and Art” will focus on avant-garde artist, Jeff Decker.  If you are not familiar with Jeff and his work, well now is your chance to get the full on deal of Decker!
In addition to Jeff’s ten beautiful bronze sculptures, there will be a large and eclectic display of motorcycles and wall art culled from his personal collection, friends and other artists filling the 7,000 square foot gallery. Jeff will also be working on a new sculpture in the gallery for several hours each day during which time visitors can chat and ask questions from the basics of “lost wax” bronze casting process to motorcycle history or how “Slant Artists”, the incredible motorcycle racers who climb steep inclines against the clock and each other, have impressed him. Each person will be challenged to come away with their own understanding of Jeff’s inspirations, aspirations and what makes this eccentric tick, and perhaps what inspires artists in general.
Bikes from Decker’s own collection include historic pieces such as his 1914 Harley-Davidson Twin (that he rode across the United States in the Motorcycle Cannonball race) to unusual bikes like his 1930 H-D DAH hillclimber or a 1949 H-D WR racer.  He has personally customized machines that were previously considered off-limits, like his 1941 Crocker and his 1952 Vincent.  Add to the mix his respect for bikes like ex-pro-boarder Jason Jessee’s 1949 Black Tibetan Panhead and many of Cole Foster’s bikes and you can see how diverse this artist really is.
Decker’s interests lie not only with motorcycle related sculpture, but all aspects of motorcycling.  With his fascination for motorcycling history and with the aid of the impressive library on the subject he has built, Decker’s understanding is thorough and deep. He could easily fill a position for historian or archivist if one were posted, and if he were looking. Of course, Decker is much too busy and happy doing what he does, which in addition to sculpting has him collaborating with Langlitz Leather, reviving great motorcycle history and many such endeavors throughout Italy and Japan.
The passion for motorcycling and art that you sense in Decker’s presence can be traced back to his childhood, when his father took him along on visits to Steve McQueen, Ed Roth and Von Dutch.  As a young aspiring artist, he worked with well-known sculptor Stanley Wanless.  Today, Decker’s own sculptures (the only sculptures to be licensed by Harley-Davidson) are collected and exhibited around the world. His commissions have grown in scale to the point that a 16’ 5,000 pound bronze now graces the entrance to the Harley-Davidson Museum in Milwaukee.
Regarding his involvement with the Motorcycles as Art Exhibition, Jeff Decker states “Since the inception of Michael Lichter’s museum quality exhibits in Sturgis, I’ve been able to participate in them often and am extremely honored to be the focal point this year.”
“These yearly exhibitions are not only a labor of love but a chance for me to openly express my creativity and introduce friends and colleagues to a venue and audience that have been incredibly loyal and generous,” explains Lichter.
Visit www.motorcyclesasart.com for more information.