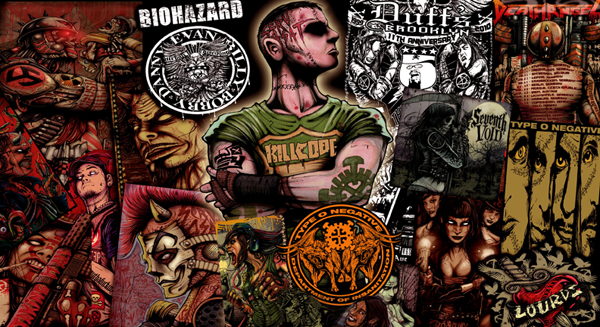 If you have a liking for graphic novel comic book style/album cover Rock art then your going to dig this artist who blazes out of New York City. I became familiar with Joseph Hernandez via one of the greatest bands, Type O Negative. Joseph creates everything from album artwork, original one of a kind prints, to rock concert t-shirts, this guy is unbelievable raw genius.
After looking at Joseph’s art for a few years, thanks to facebook I finally could reach out to him. A friend request later and we set up some time to talk.  When we first get on the phone Joe apologized for his rough voice, you see, being a brave New York guy who loves this time of year and embraces it with no jacket or hat when he’s out on the town, always leaves him paying for it with a fever of 103 and a throat that feels like he just swallowed a fire ball and the damn thing got stuck.  No problem for me, I can understand his gravely voice and thick New York accent, being from the northeast this is the norm for me.
As Joe and I talked I learned that he believes his talent for drawing some of the sickest art I have seen has been inherited. As a young kid who grew up with a mom and aunt that had the talent, Joe feels his talent is not a “god given gift” but rather something inherited that he learned how to hone. He’s been drawing as long as he can remember, and recalled an experience at his elementary art club. Joseph was kicked out for not drawing what the others were assigned, he would go off and do his own thing, something that those teachers should have embraced rather than tossing aside.
Growing up with an older brother who played rock music all the time, Joseph took a liking to the genre of music early on. His passion for the music could be pulled out of him via pen and paper. Joseph told me about when he was younger and would re-visit a few stores in Greenwich Village, always staring at the rock t-shirts and album art, posters.  Along with what his brother was into these images were around him daily. He was submerged in them.  Years ago Joseph took out a book from the library on how to draw comics and he never returned it, he still gets nervous when there is a knock at the door, wondering if there is a 10k summons on him for the unreturned library book.
At 31 years old Joseph makes his living working as a doorman in Brooklyn, which actually allows him lots of time to scribble on paper and turn out some of the most intense animated creations you’ve ever seen.
Joseph started working for bands when he was 18, the band “Nothing Left” asked for a drawing of a vamp vixen in a river of blood, the art went over big and more requests started to come in. Always supporting local NY bands Joseph started to do some art for Type-O Negative out of admiration, Joseph posted some of his work on the fan page on the band website and the rest is history. He has designed t-shirts for them along with numerous other bands / clients like; carnival wax, seventh void, otep, death angel, killcode and biohazard. You can see a ton of Joe’s work hanging on the infamous Duff’s in Brooklyn, one of Joseph’s favorite spots.
“I’m always appreciative to see people admire my work on the walls,ceilings,doors and floors of Duff’s, it’s great to see people walking by doing a double or triple take and just staring at it. Jimmy (Duff) has my art hanging randomly throughout the place. It’s almost like a gallery of my work.”  When people comment on how much talent Joe has or how they wish they could do what he can do, his come back is usually humble and he comments how he admires what another artist can do with his/her skill, voice, instrument or the way one can write.
Joseph has recently been focusing on band artwork as well as clothing,advertising and other media, this self-taught artist continues to plow forward and is currently working on some t-shirt designs for his own line “artworx & hardwear”.
As I’m working on this article I just got news that Joseph’s art for the album cover for Seventh Void has just been released, he is also working on updating his website (joeyjamesart.com) where you will be able to get your hands on some shirts of his one of a kind designs. Pay attention to this guy, his talent is endless and I can tell his creations are only going to get more intense.  Check out Joe’s work at joeyjamesart.com