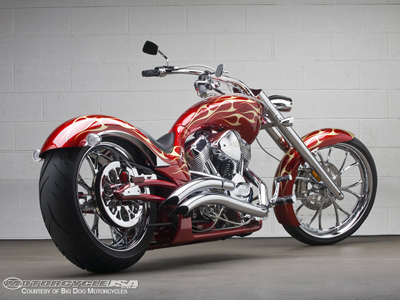 By Daniel McCoy, WBJ Biz Talk
Big Dog Motorcycles in Wichita is ceasing production and converting into a parts manufacturer and distributor, according to sources in the custom motorcycle industry.
Rick Fairless, whose Texas-based dealership, Strokers Dallas, sells Big Dog motorcycles, on Tuesday confirmed with the WBJ comments he made to Dealernews.com.
Fairless says he has spoken with Big Dog owner Sheldon Coleman who told him the bank took over and production has been stopped for good. Coleman plans to create a new business that makes and sells parts to Big Dog owners and dealers, Fairless says.
Coleman did not immediately return calls seeking comment on Tuesday. Company president Mike Simmons was unavailable to speak.
Fairless says the news from Coleman wasn’t good, but it wasn’t completely unexpected either.
“It was something that you dreaded and hoped the day would never arrive,” he says. “Of all the manufacturers I’ve worked with, none came close to taking care of their dealers like Sheldon Coleman and Big Dog. It’s kind of the end of an era.”
Questions about Big Dog’s future began swirling Monday after the company confirmed it had furloughed 10 more employees and industry insider Cyril Huze reported that the company was closing its doors.
Big Dog’s president, Mike Simmons, told the WBJ on Monday that the business was still open, but he wouldn’t comment on the company’s future.
On Tuesday, Huze told the WBJ in an email that he stood by his blog but would not reveal his sources.
Fairless says he’s sold two Big Dogs within the last month, as he worked through his remaining inventory.