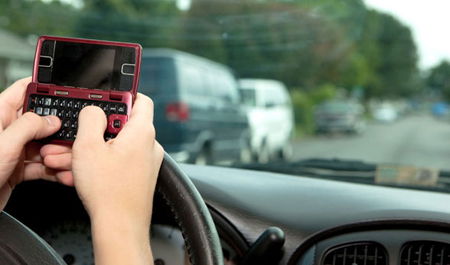 Texting and driving caused almost 400,000 injuries and deaths last year across the United States and is quickly becoming America’s fastest growing killer, but there’s a growing mission to drive those numbers down.
What started off as a wearable reminder to be text free while driving has grown into a national mission to make the roads safer for everyone. Earlier this year, a Colorado family started giving local teens a “TXTNG KILLS” thumb band to make them aware of the dangers of texting and driving. Just a few months later, national attention of the texting crisis has the Edgin family sending out over 30,000 bands per month and working with schools, community groups and police agencies across North America to collect 1,000,000 signatures on their text free driving pledge.
“Texting and driving makes you 23X more likely to crash and causes more accidents than drinking and driving”, says Robert Edgin (founder of the Million Pledge Mission), “even though it’s illegal to text and drive in most states, very little has been done to educate drivers of just how dangerous it is – until now.” The laws across the US and Canada have become increasingly strict in dealing with texting and driving and a number of drivers have been charged with vehicular homicides in recent years for deaths they caused while texting behind the wheel.
The problem, according to Edgin, is that an overwhelming number of drivers make texting a normal part of their daily commute and end up spending more time looking at their phones than they spend looking at the roads. “Texting takes your eyes off the road for an average of 5 seconds at a time. At 55 mph, that’s the same as driving the length of a football field blind”, says Edgin.
The Million Pledge Mission kicked off the first week of April to educate drivers across North America of the dangers of texting and driving and collect 1,000,000 signatures from drivers who commit to be text free behind the wheel. Schools, colleges and a number of police departments and community groups are giving away “TXTNG KILLS” thumb bands to drivers who sign the pledge as a wearable reminder to stay text free while driving. Anti-texting campaigns have grown by the thousands across the nation over the past 12 months and schools are making an extra effort to promote text free driving as prom and graduation seasons (the 2 deadliest weekends of the year for teen drivers) is getting under way.
“This is a problem that every driver in the country has to deal with every time they get in their car”, says Edgin. “Most of the people who die in texting and driving accidents are just innocent people who were in the wrong place at the wrong time. It’s time for people to do the right thing and put an end to all of these preventable accidents.” You can sign the pledge online at www.millionpledgemission.com or by downloading the pledge to print and sign it.