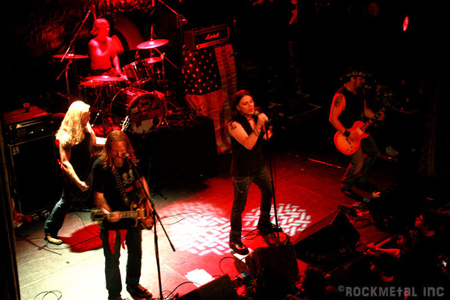 Many will argue that some of the best Rock music hails from New York City, though over the years it has been the norm that  most rock music was blazing out from the west coast.  Lately though, one can say these days the New York Rock  Scene is back in full force. One band that’s jammin’ the pulse of New York City Rock is KILLCODE, made up of all born and bred New Yorkers with the exception of one, Chas who hails from PA.  KILLCODE is hittin’ the scene hard and ready to share their high energy with Rock-n-Roll lovin’ crowds out on the road.
KILLCODE is made up of Tom Morrissey on vox, Chas on guitar/vox, Erric Bonesmith on bass/ vox, Pat Harrington on guitar/ vox, and Rob Noxious laying down the beat on drums.
I got some time with Tom on the phone the other night, the guys were just heading into rehearsal working on their new album with producer Stacey O’Dell and getting ready to start up on the armed forces entertainment tour of africa and the middle east. While Tom told me the band is not politically driven they would do anything to show their support for the guys and girls puttin’ it all on the line overseas. “None of us have served, but all of us have family that have, so this is the least we can do to show our support of what these soldiers are doing for our country”    “We are playing a send off show at the Mercury Lounge in NYC on May 7th to kick this off”  The guys have been jammin’ together for over 2 and half years now and all have been playing in bands since as long as they can remember. After knowing of each other from playing in other bands and admiring talents they decided to get together and create KILLCODE. Never after any certain style or sound, these guys are just kickin’ out what they love, Rock and Roll.  I asked what influences they have and while some may be at different ends of the spectrum it is clear to see they all share the same influences in what they take away from each artist/band they dig. Playing in your face, loud high energy music that has a solid “meat and potatoes” type of dish served up with it’s heavy hittin’ dual guitars and driven bass line and drums, some have billed these guys as “southern heavy rockers”. I asked Tom what his take on that was and he said “Were just playing Anthem Outlaw music filled with high energy hooks and substance, sure we all have influences in southern rock so if that comes out and becomes us, we embrace it”
KILLCODE is all about connecting with fans and living the rock and roll lifestyle, which to them they’re living in the heart of it all; New York City, with some of the best clubs in town to play and best bars to hang at, these guys all work day jobs that allow them the time they need to put their passion into the band. You can often find them hangin’ at Duff’s in Brooklyn which in their opinion is the essence of what Rock and Roll is all about. “Jimmy Duff supports bands like no other and there is no place on earth like the welcoming feeling of Duff’s”
Tom told me the guys are still out on the streets doing the grass roots way of promoting by hanging out with the fans at the clubs, still printing posters, hanging flyers around town, but at the same time, tech savvy enough to embrace the social networking scene and use it to connect with the fans and keep everyone informed of what is going on. These guys are so in tune to digital media they even create videos they post on their FB page to keep fans on top of what they are doing and make ’em feel like part of the process. “The videos are actually awesome for us to watch back and learn from, we might see some things that are going down in practice that we might want to elaborate on or change all together”
In early 2009, KILLCODE released their debut EP, “To Die For”, After successfully completing an east coast run as main support for FUEL, they released a second EP “Taking It All “.   KILLCODE has also been headlining and selling out some considerable venues including the Mercury Lounge, Gramercy/Blender Theater and The Bowery Ballroom in NYC in addition to being offered main support slots for both FILTER and Powerman 5000.  Currently KillCode is about to sign with Extreme Management Group (Suffocation, Origin, Malevolent Creation, Decrepit Birth, etc) and are in the process of recording their  first full length album with producer Stacy O’Dell.
Their song “Breaking Away” was  featured in the new movie /inspirational documentary “Dressed”- which opened  February 4th at a  Sold Out Show at Chelsea Clearview Cinemas.   The guys are focused on getting ready for the AFE (American Armed Forces Entertainment) tour that will keep them busy during the month of May and then ready to hit the US and tour again, because hey “thats Rock-N-Roll”!  Check out the KILLCODE FB page to stay on top of where you can catch a KILLCODE show out on the road, who knows maybe you’ll even catch these guys out on the motorcycle rally scene. Don’t feel like waiting to catch them live, go grab some KILLCODE on itunes.