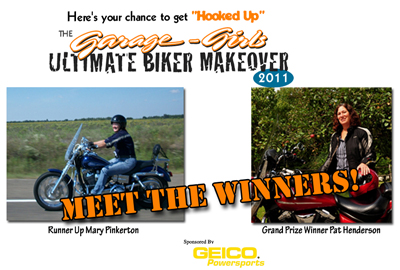 After a month of public voting the 2 winners of the Garage-Girls Ultimate Biker Makeover have been chosen.
Contestants (guys and girls) were asked to submit a 600 words or less essay – describing why they are most in need of a biker makeover as well as a photo by May 10, 2011. Submissions were narrowed down to the final four by selected judges from Garage-Girls and Carlisle Events. The final 4 were then placed on Garage-girls.com for the public to vote online at www.garage-girls.com for who they felt most deserved the Ultimate Biker Makeover.  Runner up Mary Pinkerton shared her story of experiencing the loss of her mother and then being informed she was diabetic. After focusing on her health and making changes to her new condition she has found herself many pounds lighter and with riding gear that no longer fits her properly.  Grand Prize Winner Pat Henderson shared her story of continually making self-sacrifices to provide her children with all she could, which included giving up her motorcycle. With her children grown she is asking for help in fulfilling her dreams of getting back out on the road.
Mary and Pat will both receive all-new gear and accessories with Pat, the grand-prize winner, also receiving accessories for her motorcycle.   Winners must be present at Carlisle Bike Fest on Saturday, July 23rd, 2011 to collect their prizes.