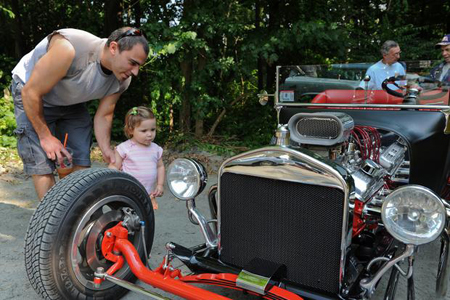 For most of us girls that enjoy this Garage lifestyle, we credit that passion to our Dads, the first man to share the lifestyle with us. Remember the days of your Dad bringing you to car shows, and races and always “carrying” you or giving you a shoulder ride when you got too tired to keep walking. Remember the excitement you got when you watched the cars fly down the drag strip with your Dad?
We sure do.  So, to all the “Garage Dads” out there, Happy Father’s Day, thanks for sharing the passion with us!
Here is a little History on Father’s Day
Father’s Day, in the United States, is a holiday (third Sunday in June) to honour fathers. Credit for originating the holiday is generally given to Sonora Smart Dodd of Spokane, Washington, whose father, a Civil War veteran, raised her and her five siblings after their mother died in childbirth. She is said to have had the idea in 1909 while listening to a sermon on Mother’s Day, which at the time was becoming established as a holiday. Local religious leaders supported the idea, and the first Father’s Day was celebrated on June 19, 1910, the month of the birthday of Dodd’s father. In 1924 President Calvin Coolidge gave his support to the observance, and in 1966 President Lyndon B. Johnson officially proclaimed it a national holiday. Observance on the third Sunday of June was decreed by law in 1972.
Although it was originally largely a religious holiday, Father’s Day has been commercialized with the sending of greeting cards and the giving of gifts. Some observe the custom of wearing a red rose to indicate that one’s father is living or a white rose to indicate that he is deceased. Other males—for example, grandfathers or uncles who have assumed parenting roles—are often also honoured on the day. Some Roman Catholics have continued to observe the feast day of Saint Joseph, on March 19, as a tribute to fathers.