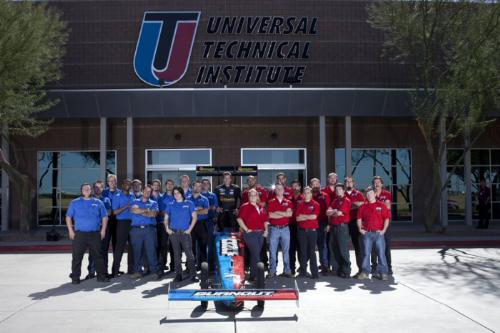 Burnout: The Ultimate Drag Race Challenge Premieres June 25 at 12:00 p.m.
As the smell of burning rubber and gasoline fill the air, an engine revs and two cars rocket down the quarter-mile track, racing to the finish – this is Burnout: The Ultimate Drag Race Challenge. Ushering in a new class of reality show, Burnout is a nine-part MTV2 reality series that follows two teams of students and instructors from Universal Technical Institute (UTI) as they battle against each other in a test of skill, persistence and dedication to see who can build the fastest drag car with just 100 hours of build time.
Hosted by drag race legend Clay Millican and freestyle motocross and off-road racer Carey Hart, the action-packed series follows 20 UTI students and four instructors as they participate in challenges and work together to build a drag car from the ground up, all while working feverishly to source parts, keep up on schoolwork and maintain their everyday lives. It all leads up to a final race to determine the winning team, coming down to two cars and just ten seconds on the strip.
Fueled by competitive drive and bragging rights, each episode features the teams competing in various timed challenges, from unbolting engines to diagnosing clip cars, for the opportunity to add more time to their team clock. The premise is simple – win a challenge and win more build time for your team or lose a challenge and along with it precious hours. The winning team will earn scholarships and cash prizes, while the losing team’s car gets crushed.
Burnout: The Ultimate Drag Race Challenge premieres at 12:00 pm(EDT) on Saturday, June 25 on MTV2. Check local listings for more details or visit http://www.uti.edu/Burnout.