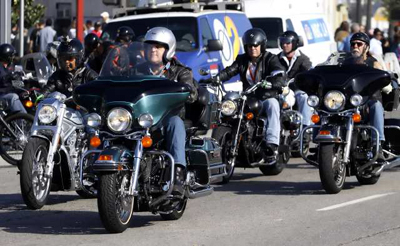 We had to share this story, we normally don’t like to give press to the “mainstream” media and gossipy type stuff, but as riders this one just doesn’t sit good with any of us, how do you feel about it?
From the LA Times
Moments before two Love Ride participants were killed Sunday in a freeway traffic collision, the event’s grand marshal, “The Tonight Show” host Jay Leno, told a crowd of bikers that he wanted to see “somebody go down.” “Every year, [the organizer] says, ‘Drive safe,’” Leno told the crowd in kicking off the 28th annual Love Ride in Glendale. “I’m gonna say, ‘Don’t drive safe.’ I wanna see somebody go down. So it’ll be fun. I want it to be in front or behind me and see a whole row of bikes go down. Get drunk, fall off the road. We’ve all become too damn polite … we haven’t had one incident.”
About an hour later, Romarino Zeri, 51, of Los Angeles and Julie Cameron, 38, of Venice were killed when their motorcycle collided with a big rig on the Golden State (5) Freeway in Pacoima, officials said.
The big rig’s rear tires ran over the pair, whom paramedics pronounced dead at the scene, California Highway Patrol Officer José Barrios told the Glendale News-Press.
Representatives for NBC-Universal and Leno did not respond to repeated requests for comment.
The motorcycle riding community took to the blogosphere Monday, with one Love Ride participant writing that Leno’s remarks would haunt her forever.
“I wish he had not joked about that, if someone does go down, he is going to feel really bad for his comments,” she said.