A Boot To Ride In! 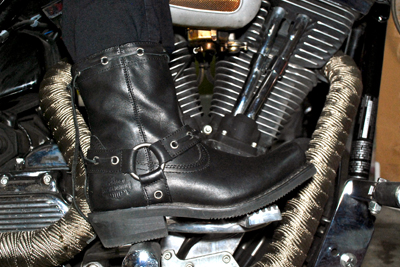 By, Penny Osiecki
photo credit; Derek Richard Osiecki
In 1994 a magazine had asked me to do a test ride on a middleweight cruiser. I was a new rider test riding a motorcycle that belonged to the manufacturer. After the test ride was complete I was backing the motorcycle into a parking spot that had remnants of oil throughout. Because I was not wearing the correct riding boots my foot slipped on the oil and I dumped the bike. Unfortunately, I ended up with reconstructive shoulder surgery from the fall. Since this incident I would never think of wearing anything other than real riding boots, and prefer H-D Footwear boots because of the rubber outsoles.
My previous boots were similar to the “Faded Glory” H-D Footwear design that had the round toe and tied up the front. This time I decided to go with the style “Jean” stock #D84431 that has a zipper and a square toe for a different look.  This boot also has a full-length cushion sock lining for comfort. Most importantly, I made sure it was a riding style boot for safety with an oil resistant rubber outsole. Quality is a huge issue with me as well. When I first started riding I went through a few different non-Harley boots and they didn’t last very long. I do an average amount of riding and would say I had my last pair of H-D Footwear boots for at least 6 years.
I’ll have to be honest, it took my last pair of H-D boots quite a while to break in but the “Jean” boot was broken in within 3 or 4 times of wearing them. The zipper is easy to zip and unzip and they fit under my jeans with ease. The toe of the boot fits perfectly between my peg and shifter without feeling bulky and the rubber outsole performs perfectly.
I would highly recommend H-D Footwear to any rider or non-rider that’s looking for a quality riding boot that performs well and is stylish.  Head over to the website or your local dealer to check out the options they offer.