Chopper Live on Discovery Channel; Jr, vs. Sr. Vs. James 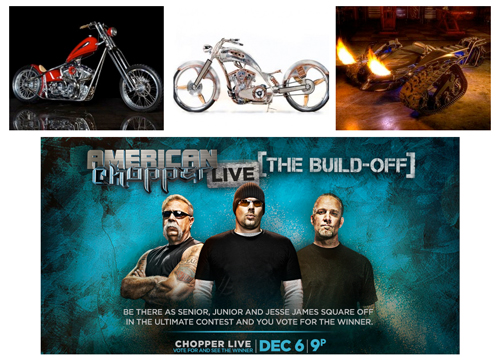 So wow, like everyone is talking about this show huh?  Some excitement is coming back to the motorcycle tv shows, too bad it’s only going to boost ratings for the overly redundant OCC and American Chopper series…. Not sure about you guys but I’m just not interested in watching those guys on tv anymore.

But this series is different, having Sr. go against Jr. and Jesse James on a 3 way build off that ends up with  viewer’s deciding who the winner will be. All the voting goes down here.

Last night we saw the bikes being built, Jr. taking his “theme” bike to a new “high” with an airplane inspired build, Jesse going balls out with a straight up hand built hard core chop, and Sr. with a ummm what the f*&^k was that thing?  So, anyway guess we will see tonight who will be crowned best builder… really?, not sure if I would go so far as to say it should come down to these 3 guys as being the best builder in the world… I personally know tons of craftsman out there that can dance circles around all 3 of these bozo’s.  Anyway, watch tonight and give us your feedback, what did you think of the bikes, who will win… lets hear what ya got?