What Fruit Are You?? An Apple a Day keeps the Doctor Away, By Lisa Maiorana, Certified Personal Nutritionist 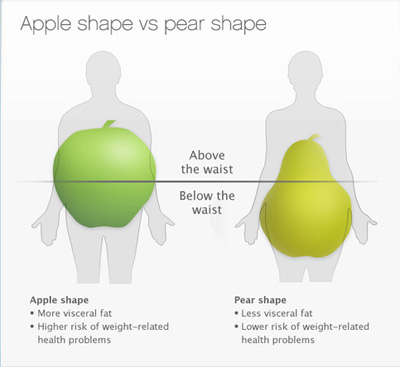 Ever try to squeeze your feet into shoes that are one size too small just because you love the style?  Doesn’t work, does it?  Well, maybe you can cram your feet into those shoes for the sake of a special evening, but you can’t wear them all the time.  They’re just too uncomfortable.  Starving yourself with the goal of creating a physique that’s contrary to your natural body type is a similar thing.  You might get there for a month or two, but eventually your body will rebel. Ultimately, there are three basic body types.  It’s important to understand your shape and know what you can and can’t expect.  Which one best describes you?
The apple shape.  People with apple shapes tend to store fat in their upper bodies, so if an apple is carrying extra weight, it’s usually around the belly.  Apples have evolved to store fat in this way to adapt to long periods of famine.  Fat stored in the upper body can lead to heart disease, so it is important for apples to be health conscious.
The pear shape.  Pears hold the majority of their fat in the lower body: hips, buttocks, saddlebags. Pears are mostly women.  This shape has evolved because fat stored in these areas aids in fertility and breast-feeding.  This type of fat is not as much of a health risk as abdominal fat, but it is harder to lose.
The proportioned shape.  Lucky proportionates have fat cells distributed equally throughout their entire body.  When they gain weight, they gain it everywhere.  When they lose weight, it comes off evenly.
Research has drawn significant links between body shape and heart disease.  People whose fat collects around the waist – the classic apple shape – are at higher risk of heart disease than their pear-shaped counterparts, whose weight collects around the hips.  A pot belly increases the risk of a heart attack — even if the rest of the physique is as skinny as a beanpole.  The person with that build would have a low body mass index (BMI).  Based on that, the person would be classified as having a low heart attack risk.  It’s really the ratio between the distance around that pot belly and the circumference of the hips that tells the tale of risk.  If the waist-to-hip ratio is high, irrespective of the BMI, the risk of a heart attack is increased.  Where does your body collect fat?  Is your body shape more like an apple or a pear?