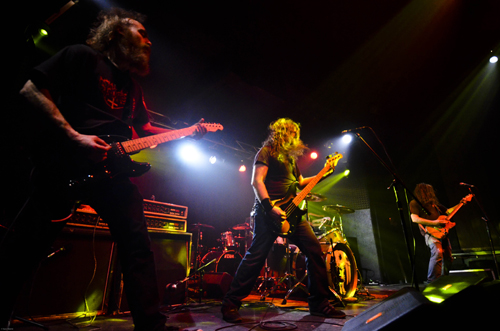 As dedicated readers to Garage-Girls you should all know about Rally TV, The production company that brings you all the killer vids from the major motorcycle rallies.  I swear there is a reason why I’m selflessly promoting Rally TV in a full throttle rock article…..  Yeah, so we are all in Vegas for Las Vegas Bike Fest covering the event for Rally TV and it was literally non-stop work, out early shooting and up late editing. The editing room for some reason always ends up being where people come and hang out and ‘bs about fun, stupid stuff.  So in line with Fun stupid stuff, in walks in Paul from Bare knuckle Choppers, he sits down and pulls up a video for this band Red Fang. At first I was like what’s the name of them “Red Tang??” He was like “No, just check these guys out!” so we watched the video for the song Wires. Not sure if it was a combination of working so late out in Sin City and the tiredness had set in, but we all busted a gut rolling on the floor laughing at these guys. The video was hilarious, the band of dudes hanging out drinking, they land a check in the mail for $5,000  to make a music video.   Watching dudes spend 5 grand to make a video can be rather entertaining if your the guys in Red Fang.  It’s a stellar vid complete with a beater car smashing stuff on an active airport runway. Yeah we were hooked, Oh I’m sure the fact that these guys ROCK had us hooked as well.  After listening to a few tracks, it was on.  I had to track these guys down for Full Throttle Rock. After a few emails I was in touch with Bryan Giles guitar and lead vox. He spent some time on the phone with me filling me in on the Portland Oregon based band made up of Bryan, Aaron Beam on bass, David Sullivan on guitar and John Sherman laying down the drums.   Bryan informed me these guys are all transplants to the Portland area and it’s all music that got them playing together. Having all played in previous bands and some hailing from the same bands, it was just a good fit to wind up all jamming together.   The writing process is a communal effort with everyone pitching in with riffs, hooks or lyrics. Ego’s get left at the door and everyone keeps an open mind to what one of the guys will bring to the table. Working this way gives them a better brand practice and something that was initially introduced which may not have been so great, can easily turn into something killer once they all have a chance to contribute.  Bryan told me.

From band practice to playing live shows Red Fang manages to have fun always. “We are older dudes, so it’s not that insane, like you won’t find pools of jello or anything too wild, but we manage to have our fun”.  Playing live is a big part of this band and they are getting ready to embark on 5 weeks of touring in the US.   I asked Bryan if he could share any crazy stories from the road, “oh yeah, well we just got done a show, packed up the van and were about 40 miles out of town when a deer ran out into the road, the van swerved and flipped twice. None of us had seat belts on and we were all just rolling around in the van with equipment everywhere. We all walked away and John our drummer had to get 1 stitch, just 1. It was pretty crazy, we didn’t hit the deer and we didn’t get messed up after flipping twice. Our girlfriends picked us up and the next day, we loaded the equipment back up and played that night.”   Yes, these dudes are hardcore!

Bryan told me doing shows in Europe are pretty crazy. “The crowds are intense, 40,000 people, all enthusiastic to you. they sure do make you feel welcome over there. The Hospitality is the best, make sure you have enough to eat and a place to crash, we love it over there”

We talked about how the guys in the band are all pretty much self taught musicians that credit their experience to playing in bands and learning from other band mates.

Red Fang debuted in 2009 with the self titled album “Red Fang” and Followed that with “Murder the Mountains” in 2011. Both albums are filled with heavy bassy, driven riffs with killer guitars and heavy drums. These guys play it heavy and hard and deliver a sound any picky heavy metal enthusiast will dig.  Self described as “Beer Soaked, Ass kicking Heavy Rock.”, yeah I’d say that about sums ’em up.

In General Red Fang is made up of dudes living normal lives, they work, they have fun and they like music.  You got to check them out and catch the video for Wires.