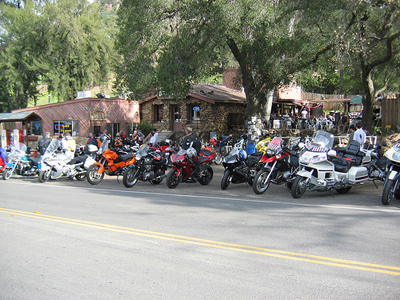 By, Dana Bartholomew
The late actor Steve McQueen once convinced Ed Savko to buy a motorcycle for screaming hill climbs across the Malibu Hills.
But the patriarch of the Rock Store never took to two wheels. Instead, he and his wife Vern created the world’s most famous gathering spot for motorcycles.
“He almost killed himself,” said Vern Savko, 84, of Thousand Oaks. “He probably only rode one day.”
Hundreds of motorcyclists from throughout Southern California descended Monday on the Mulholland Highway diner to celebrate the patriarch of all motorcycle hangouts.
Savko, who ran the Cornell diner with his wife since 1961, died April 2 of congestive heart failure. He was 86.
He was credited with helping Vern turn a sleepy country grocery into a Sunday pitstop for up to 1,000 thirsty motorcyclists on any Saturday or Sunday.
“Ed was a straight shooter,” said Tony Martorelli, 52, of Moorpark, who has been riding the twisty highway for two decades, where Ed greeted motorcyclists from the parking lot. “He’d say, `That sonofabitch.’ Absolutely good soul.
“He gave us all a place to gather, like a big family.”
Edward John Savko was born Sept. 28, 1925, to Czech parents John and Mary Savko in the steel town of Homestead, Penn.
There was little he didn’t do. During World War II, he served on the destroyer USS Waller in the Pacific.
He later drove a cab. Manned a milk truck. Then in 1947 he and his wife Veronica settled in Van Nuys, where he delivered bread from a Log Cabin truck.
One day he noticed the brown rock store on a dirt road in the hilly community of Cornell, and bought it. Business was so slow that Vern did her family ironing behind the counter.
“All day, if we made $25, we were doing well,” said his son, Richard Savko, 61, of Monterey.
But soon McQueen rolled in on his famous Triumph, followed over the years by the likes of Jay Leno, Arnold Schwarzenegger, Harrison Ford and Tommy Lee, plus a virtual Who’s Who of motorcycling.
The Rock Store, featured in scores of films and magazines, became a worldwide motorcycle destination. Or a place even to park a four-legged steed.
Ronald Reagan, who once lived in the Malibu Hills, would tie his horse out front before he became president. As a hobby, Ed once raised thoroughbred racehorses.
“(He) was my love. (He) was my whole life,” said Vern, after her husband’s funeral at St. Jude’s Catholic Church in Westlake Village. “Sixty-five years tomorrow.”
Bikers gathered beneath majestic oaks to celebrate the round-faced man with the infectious smile who played host to generations of riders.
On a flag-topped terrace hung a banner, “The Rock Store Family We Will Miss You Ed.” “Rest in Peace, Ed,” read one inscription. “Mulholland Highway won’t be the same without you. Or, “Save a seat for me in the Rock Store in the sky.”
Condolences poured in from France, Spain, Italy, Germany and beyond, family members said.
Out front were motorcycles that rarely park side to side, from low-slung Harley-Davidsons to sexy Ducatis to high-strung Japanese sport bikes.
“Boston has its `Cheers.’ And we have the Rock Store,” said writer Lisa Sonne, who grew up nearby.
And everyone had fond memories of Ed, who never discriminated no matter what you looked like, what you did or what kind of bike you rode. “He was terrific,” said Stan Duffy, 41, of Oxnard, who rode in on a 749 Ducati. “I came back (after three years) and Ed remembered me.”To me, this is the epicenter of social motorcycling.”
Edward Savko is survived by his wife Veronica; his daughter, Sandra Clark; his son Richard, seven grandchildren and one great grandchild. His son, Edward Savko Jr., preceded him in death.